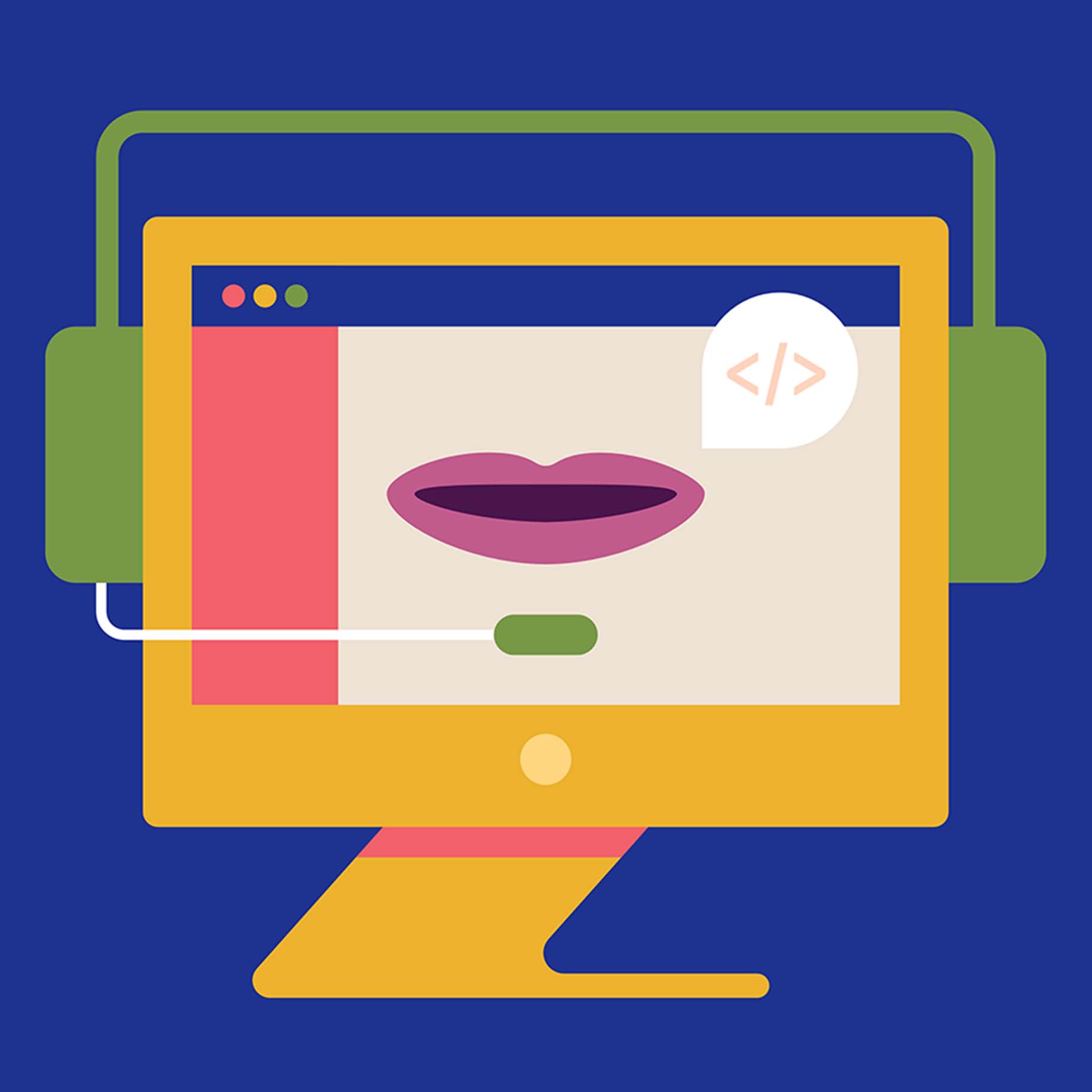 What happens when one of your coworkers needs access to a critical app, right away? If your company is like most, the process might look something like this: First, they try to solve the problem on their own, hunting through portals and forms to get a license. When that fails, they reach out to someone in IT, who directs them to file a ticket. Hours or days later, after rounds of emails and manager approvals, the issue is finally resolved.

The folks at the workplace-AI developer Moveworks realized there must be a better, faster way for employees to get help—whether they need IT support, HR answers, policy info or a map to the new conference room. So they built a conversational AI platform that automates away the disruptions of work life, like provisioning software, submitting vaccination forms and answering questions about PTO.

Moveworks becomes even more powerful when combined with Slack. By pinging a Moveworks chatbot within Slack, employees can easily track down answers and knock out tasks, all without leaving their digital HQ. That means fewer support issues, faster resolutions and happier teams.

“People love Slack because it makes work fast, easy and conversational,” says Varun Singh, the co-founder and vice president of product at Moveworks. “We designed Moveworks to deliver exactly that experience, every time employees need support. There’s no digging for forms, no navigating through a knowledge base and no waiting for help. Just ask Moveworks in Slack, and boom, you can get on with your day.”

We recently chatted with top companies like AppDynamics, Palo Alto Networks and Autodesk to learn how they’re leveraging Moveworks and Slack to transform their internal support experience and make every department more productive.

At Autodesk, the focus is on empowering people to do their best creative work. “We are in the business of making software so that our customers can design and make anything,” says Prakash Kota, Autodesk’s senior vice president and chief information officer.

To help achieve that vision, Autodesk has been creating a best-in-class experience for its employees. “If you consider our employees’ personal lives, they can get whatever they want whenever they want, on demand,” Kota says. “It should be the same in the workplace. We’re asking ourselves, how do we continue to make capabilities available on demand for our employees?” 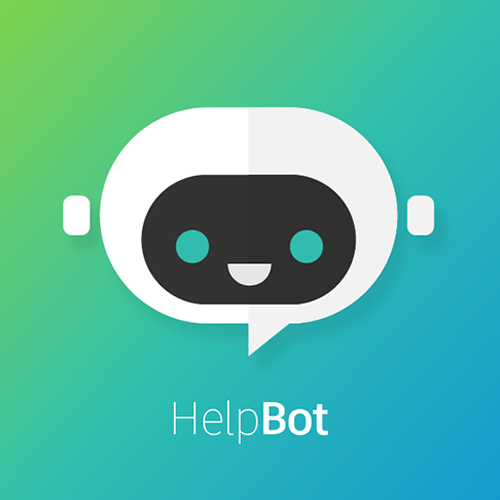 Kota and his team started researching AI chatbots to help remove these hurdles. Integrating a bot into Slack, which employees were already using every day, seemed promising.

So about two years ago, Autodesk deployed a Moveworks-powered chatbot, dubbed HelpBot, and got it up and running in Slack for all employees in less than three months.

“The idea was, let’s move beyond a ticketing system and instead aim for self-service,” Kota says. “Let’s route employees to HelpBot so the bot can try to solve their problem or provide useful information. Otherwise, it can hand it over seamlessly to a real agent who can help address whatever they need.”

HelpBot is now resolving 45% of user requests within a minute, Kota says, and routing the requests it can’t solve to the appropriate resources.

“The Moveworks bot is making a real impact by solving issues in near real time and removing friction, so employees can leverage the Slack platform to get more done.”

Autodesk could have chosen a variety of ways for employees to interact with HelpBot. But the company decided on Slack since its employees were already pros at sending Slack messages and interacting in channels. 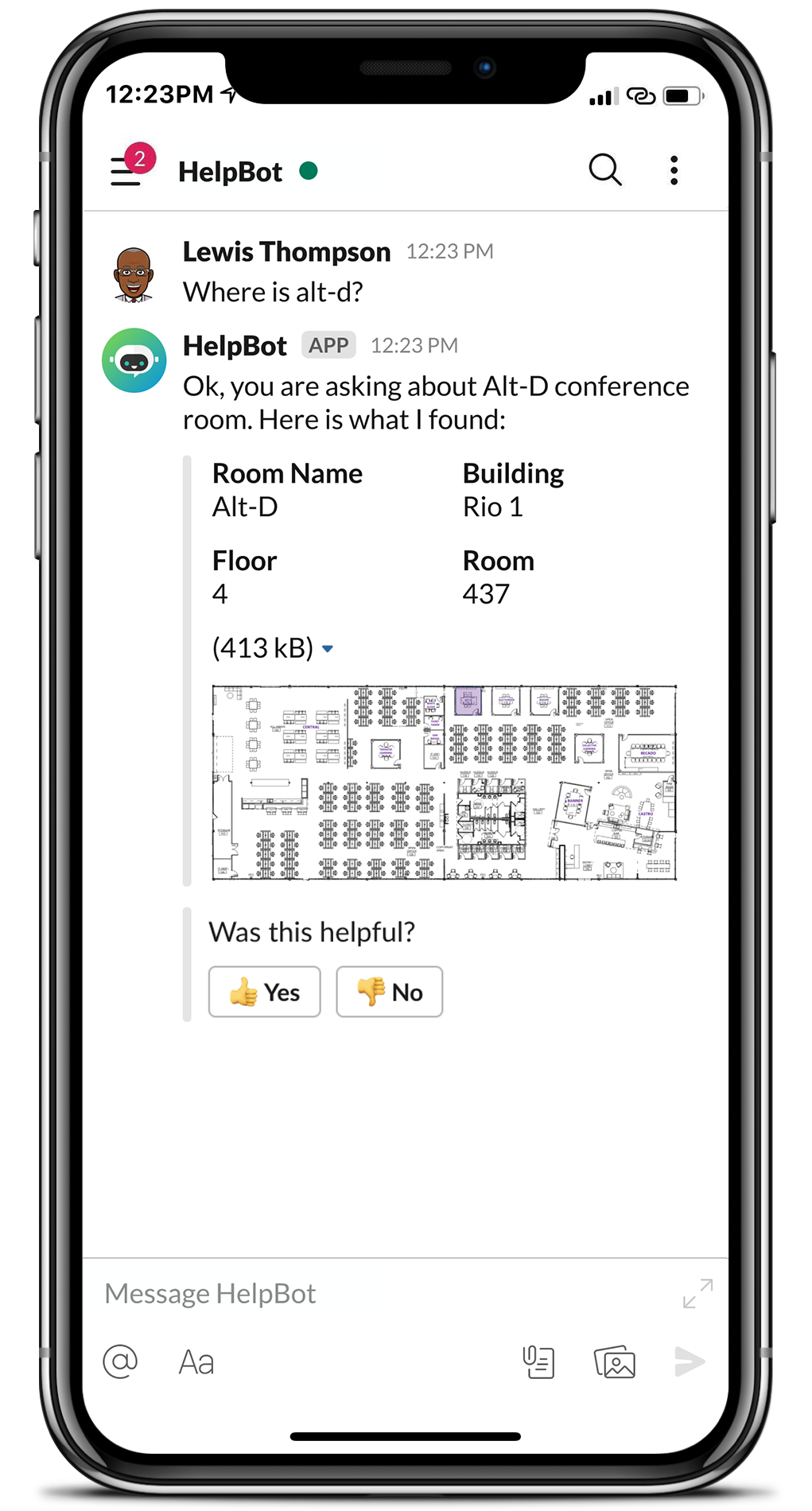 “The Moveworks bot is making a real impact by solving issues in near real time and removing friction, so employees can leverage the Slack platform to get more done,” Kota says.

That’s especially important for new Autodesk employees, many of whom started remotely. “People like me,” Kota says, “who have been at the company 16 years, understand whom to ping to get things done. Imagine the life of a new employee. They might wonder, ‘Should I even ask this question? Is this something I should already know?’ But the bot’s not going to judge them, and they’re asking it in Slack, which they’re already comfortable with, so they’ll get what they need.”

This instant gratification is positively influencing the way Autodesk employees view Kota’s team. “We are seen as automation experts who are trying to consumerize enterprise activity and give employees what they need, when they need it,” Kota says.

Resolving issues in minutes instead of hours at AppDynamics

For AppDynamics, an AI chatbot just made sense. After all, as a company that focuses on application performance, using technology to improve business efficiency comes naturally.

AppDynamics began rolling out its Moveworks bot, called AppDynoBot, to the company’s 2,500 employees in January 2019. Workers across various departments, including legal, HR and purchasing, have been using the bot in Slack to get help and solve problems on their own.

“Without Moveworks and Slack, I would probably have to hire between five and seven additional help-desk personnel. And even with a fully staffed help desk, the response times aren’t as good as real time.” 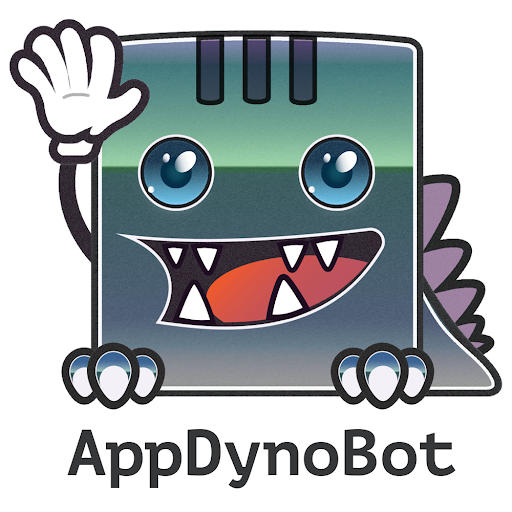 AppDynoBot’s impact has been swift and impressive, including a 44% issue resolution rate, says Russ Harris, the company’s vice president of operations. And those issues are resolved fast.

The bot answers most requests in seconds. Even those that require manager approval are addressed in minutes, rather than hours, according to Harris. “With AppDynoBot you’re getting almost immediate gratification,” he says. “And it’s available 24/7.”

The integration isn’t just providing a better experience for employees, though; it’s also letting the growing company scale up its internal support without expanding its help-desk headcount. “Without Moveworks and Slack, I would probably have to hire between five and seven additional help-desk personnel,” Harris says. “And even with a fully staffed help desk, the response times aren’t as good as real time.” 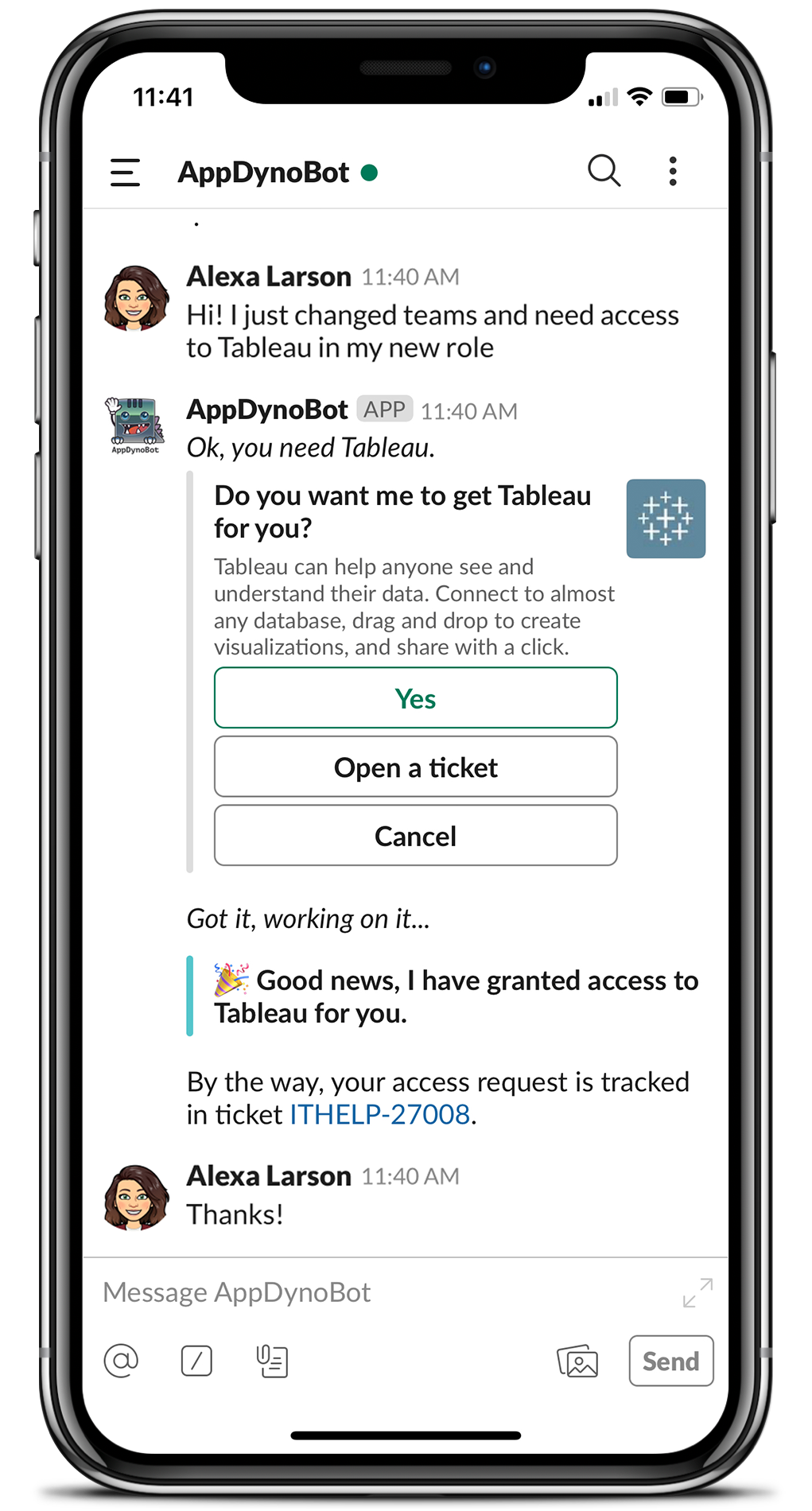 Beyond fielding inbound questions and requests, AppDynoBot also allows the company to proactively engage with employees. For example, in recent months AppDynamics faced the challenge of crafting its return-to-office strategy. By using the bot within Slack, Harris’s team was able to easily gauge employees’ preferences regarding in-person versus remote work.

“When you send out surveys like that, very often people don’t respond,” Harris says. “So you need to remind the ones who haven’t responded. We use Moveworks to draw those names from our database and populate a Slack message to them like, ‘Hey, you’ve only got 10 days left.’ And so it allows us to send automated, tailored outbound communications.”

Like workers everywhere, employees at the cybersecurity company Palo Alto Networks faced plenty of unexpected challenges in 2020. And the company had to quickly adjust.

“During that long year, we had a lot of parents at home without child care,” says Nicole Tate-Pappas, the company’s director of experience management. “We saw them doing remote distance learning during the day and then logging into work at night. And so having Sheldon there to be 24/7 support was a game changer for us, because it really did help support that notion of being able to work anytime, anywhere.” 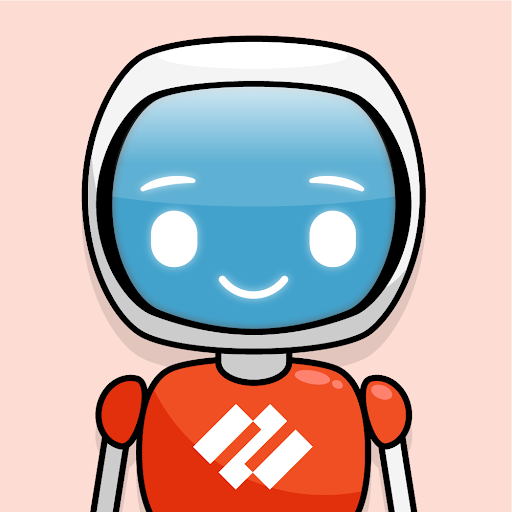 With Sheldon, employees at Palo Alto Networks can find answers and accomplish tasks within Slack, no matter when or where they’re working.

While Sheldon has helped Palo Alto Networks employees stay productive on their own schedules, the Slack and Moveworks integration has also allowed the company to do more with less.

“Last year was our biggest year of growth ever,” says Steve Januario, the company’s vice president of digital employee experience. “We hired the most people we’ve ever hired. Yet we didn’t increase our help desk by even one person. And Sheldon was a big part of that.”

With Sheldon answering common employee questions and handling routine tasks, the company’s help-desk agents have been freed up to focus on more meaningful work. Some have even been promoted as a result.

“When we wanted to provide that ability for people to get help at any time from anywhere, Slack was the first thing that came to our mind.”

“We were able to automate work that doesn’t necessarily need a human behind it,” Tate-Pappas says, “and then shift some of these folks and grow them into another career path. That part is really exciting.” 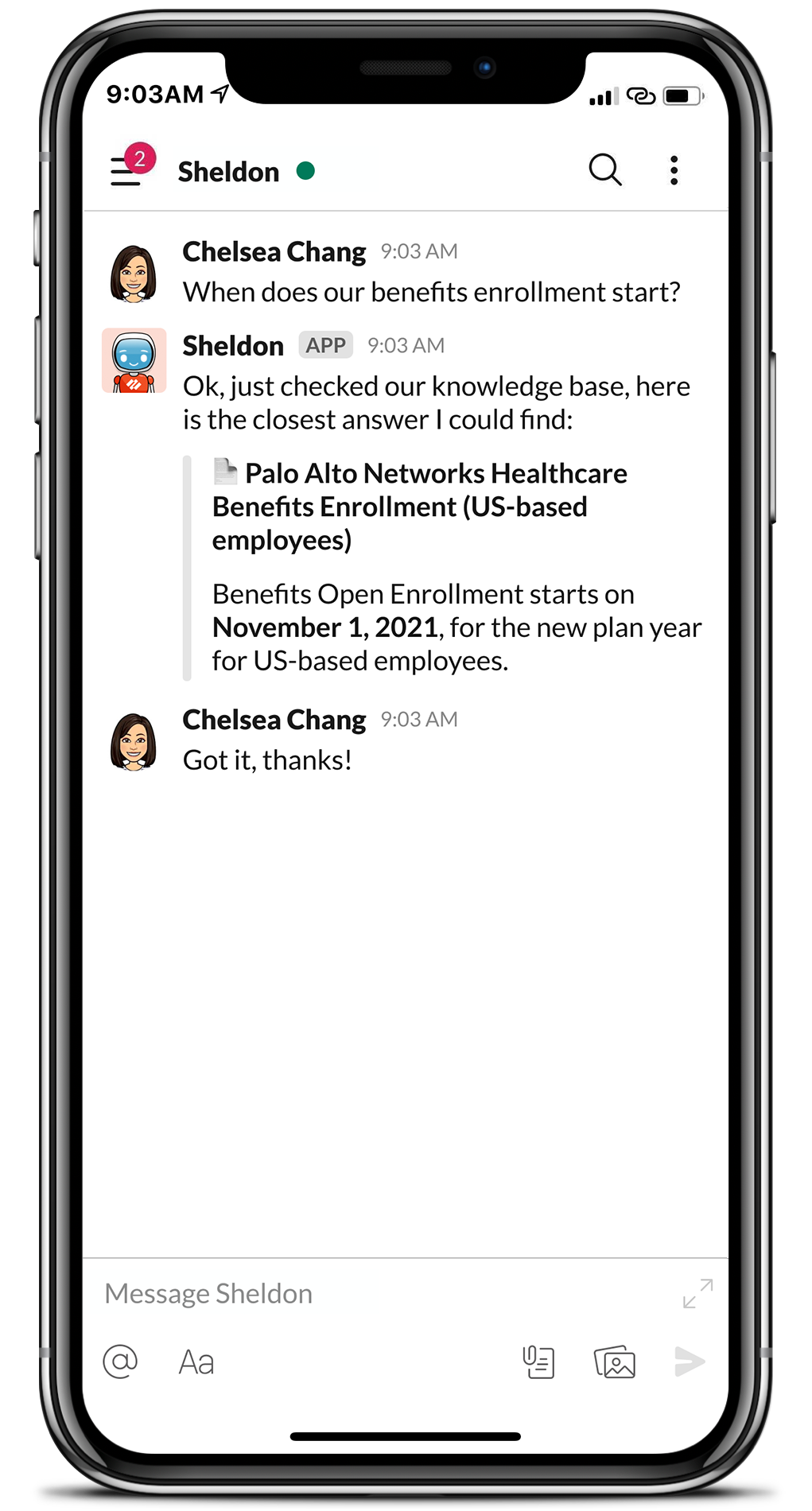 Providing automated help with Slack and Moveworks: a “no-brainer”

Now more than 10,000 Palo Alto Networks employees are using Sheldon to help with everyday tasks like changing passwords, resetting multi-factor authentications and inquiring about PTO. It’s a solution that meets employees where they already are: Slack.

“When we wanted to provide that ability for people to get help at any time from anywhere, Slack was the first thing that came to our mind,” Januario says. “We’re heavy Slack users, so it was a no-brainer to go with Slack and Moveworks for this kind of help instead of either downloading another product or having to go to a specific website. Slack is already part of the daily routine, and as a result, it’s much easier.”

“When we were looking for tools to help us with support, Slack was a definitive requirement,” Tate-Pappas adds. “Moveworks gave us the ability to solve issues right there in Slack.”

How technology is transforming your business strategy

New tools and processes are unpredictable, but you can intentionally strategize how to embrace your digital transformation

Get more done when you set your team up for success