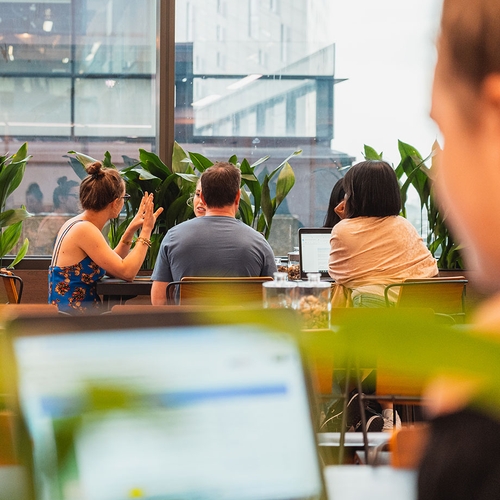 The new corporate world looks very different to the one that was in the ascendancy just two years ago. The pandemic ushered in an unprecedented acceptance of remote working, and fast-moving companies realised that flexible, hybrid arrangements are here to stay. Empathy, often underrated as a soft skill, has gained its rightful place as the keystone of good company culture.

But with the office no longer the beating heart of the organisation, how can employers make sure that their employees stay engaged and connected—to one another and the business? Slack’s Disruptors of Work virtual event series examines how some of the U.K.’s most successful, forward-thinking companies have done just that.

Founded in 2007 by Portuguese fashion and tech entrepreneur José Neves, Farfetch is the leading platform for the high-end fashion industry. It unites nearly 1,400 of the world’s best brands, boutiques and department stores, giving global consumers access to an unrivalled range of luxury.

Business advisor and author Barry O’Reilly spoke to Imer Cakiroglu, global HR strategy director at Farfetch, about how the company has thrived during a period rocked by instability. It has met its challenges head-on, promoting openness and encouraging employees to talk about the problems they face around big issues such as racism and parenting during the pandemic. This transparent, collaborative approach has led to concrete policy changes and an empowered workforce that is both happier and more productive.

The importance of listening—and acting

One of Farfetch’s company values is “Be Human,” and it came to the fore during the tumultuous past year. When lockdowns were introduced, the company’s human resources team set up listening sessions with different employee groups. In the U.K., working parents detailed the issues they were facing, and Farfetch used their feedback to quickly create a bespoke time-off initiative.

“We took an absolutely human approach as to how we supported them,” Cakiroglu says. “It was really agile; we tried to think of every time-off eventuality a parent might encounter based on what they told us. We then wanted to make sure we were being inclusive, so we opened it up to others with similar challenges.”

While the pandemic brought huge disruption to all employees, Farfetch wanted to remain mindful of the challenges that some of its people face every day. After the murder of George Floyd in Minneapolis, the Black Lives Matter movement brought the realities of systemic racism to the forefront of global consciousness. Farfetch set up listening sessions with its Black Employee Network (BEN) to find out how they were being affected by the unfolding events.

Cakiroglu, along with Farfetch’s chief financial officer and its chief executive officer, took 15 hours of Zoom calls with Black employees, alternating between Slack and a video conference tool. Each call was designed to be a safe space where people were encouraged to open up. They did, speaking not only about how they were feeling but also about the changes that needed to be made in the workplace.

“What’s more important than anything else is to take action,” Cakiroglu says. “If you spend hours listening and don’t do anything about it, then you don’t get the kind of mutual trust that we’ve built with our communities at Farfetch.”

In the wake of George Floyd’s murder, many companies gave responses on social media. Farfetch waited until it had spoken to its Black employees to ensure the company approach reflected their needs and thoughts.

“We spoke to our Black employees and agreed that they needed to tell us what we should say and what we should stand for,” Cakiroglu says. “We did that really collaboratively. We then could put it out on social media because it was written from the heart and from the community.”

“It’s really important to encourage people to talk and open up. It can be hard hearing how people are feeling, but if you lean into those conversations, you’ll end up with a stronger culture.”

Sowing the seeds for long-term change

Although its immediate responses to these major events were important, Farfetch didn’t want them to be one-offs. The company created training aimed at tackling bias and has already rolled it out to 90% of its global workforce.

“The training takes a much more empathetic view of the challenges that people face,” Cakiroglu says. “What’s been great about it is that now people are labelling bias, they’re talking about it, they’re recognising it. And that’s the start of mitigating it in a workforce.”

The listening sessions with Farfetch’s Black Employee Network also spurred the company to examine the ethnicity pay gap, as well as pay gaps that relate to disability, religion and sexual orientation. It reached out to its employee resource groups to help collect that data, using an open approach so people felt comfortable enough to speak freely.

“We organised listening sessions so we could hear their concerns and explain why we needed that information and what we were going to do with it,” Cakiroglu says. “It’s all about transparency. Tell people that you’re talking, and you’ll find that once one group joins in, others will want to as well.”

Farfetch encourages everyone to take personal responsibility for promoting a fairer workplace, and that is in line with another one of its values, “todos juntos,” which translates from the Portuguese as “all together.” The company has created educational hubs where all employees can learn more about topics such as racism and loneliness in lockdown. It also has a global, public Q&A Slack channel where anyone can ask a question.

“When we were talking about George Floyd and racism to our Black colleagues, we were also fielding lots of questions from around the world. ‘We’d love to hear more about that listening session. What can we do as colleagues of Black employees? How can we be part of the change?’ It was incredible. We got so many responses, and it sparked so many conversations,” Cakiroglu says.

“We’ve seen some really engaged, open conversations on Slack about a lot of difficult topics; it’s powerful once you start everyone thinking and learning. The inclusion that we’ve felt during this period has been mind-blowing.”

A plan for the future based on empathetic support

As the pandemic stretched on, Farfetch had to adapt to having all its employees working from home and also to onboarding new hires remotely. The company quickly learned that its managers needed more support to manage the upheaval.

“They were facing their own challenges through the pandemic, and we were expecting them to know how to remotely onboard new joiners and manage performance as well as navigate these new policies that we were rolling out,” Cakiroglu says.

Farfetch leaned into total transparency. It invested time with its managers, talking to them about what was expected and giving them tactical suggestions as to how to get tasks done.

“Now we’re at the stage of getting new hires back to the office, so we’re giving managers as much information as we can on how that’s going to work,” Cakiroglu says. “They can then go out to the wider workforce and manage that transition successfully.”

However, there will be no return to business as usual for Farfetch. Empathy with a purpose will continue to be part of its culture and policies. In the U.K., employees returning to the office are being given much more freedom to create the working life that works best for them.

“We don’t have core hours anymore; you can start work early or late,” Cakiroglu says. “For example, if most of your colleagues are in North America and you’d prefer to work that time zone, we say go for it.”

Ideally, Farfetch would like the majority of its employees to work from the office for at least 40% of the time. However, it is rethinking how its physical environment should work—the days of turning up “to be seen” are long gone.

“We don’t want people coming in to have meetings by video conference,” Cakiroglu says. “It’s about going in to brainstorm and be creative and build connections with each other.”

“As a leadership team, we’ve seen that the more we give, the more we get back. There’s a real commitment from our employees to looking after each other and the business.”

Despite the pain that the last year brought, Farfetch has thrived commercially, and its happiness score is up by 2% to 86%. Creating a culture that puts humanity first is a big reason for that. With Farfetch tackling issues like bias directly, employees are empowered to speak their truths, making for a more productive, aligned working environment.

And the smaller things aren’t neglected either. The company just launched an initiative where every employee is given a tree to plant.

“We launched it on the company_updates Slack channel, and it’s landed so well,” Cakiroglu says. “Every time an employee plants their tree, they put up a tree emoji in the channel. Projects like that just help us feel all the more connected to each other.”