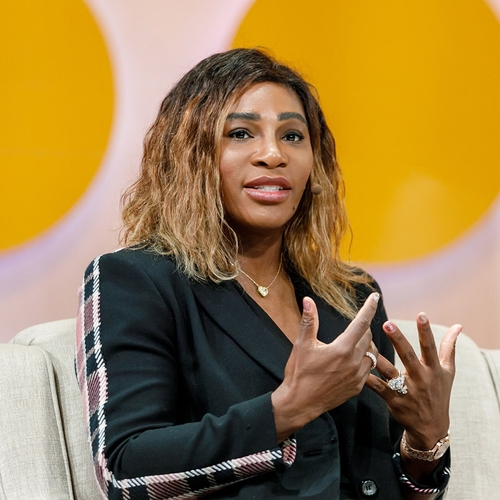 Long before the Serena Slams, the Doubles domination or the four Olympic gold medals, there was just a whole lot of practice. Around the time she turned 12, her father, Richard, gave her and sister Venus a choice: “ ‘If you don’t want to play tennis, you don’t have to,’ ” Serena Williams recalls him saying. “ ‘You have to make your own decisions in life.’ ”

“I thought about it,” she says with a laugh during the opening keynote at Slack’s 2019 Frontiers conference. But then Venus said she wanted to continue playing, and little sister quickly followed.

Even if she had quit, there’s almost no doubt Williams would have become the greatest at something else. She’s a tireless entrepreneur, a coveted board member, a passionate dancer, a caring mother—the list goes on. So what’s her secret to success?

Turns out she has a couple.

Focus on everything one thing

With so many active pursuits vying for her attention, you might assume Williams was born with a supernatural focus gene. But lately, her focus is derived from a new motivation: to be with her 2-year-old daughter, Olympia.

“I manage my time differently so I can spend as much time with my daughter as I can,” the tennis superstar says.

While you might not have an adorable, social media darling to motivate you, Williams’s method of focusing is, thankfully, transferable. “Each time I do one thing I say, ‘OK, I’m focusing on this right now. And everything else is not going to come in here,’ ” she says. “This is my focus.”

Serena Williams off the court

Favorite Book: Dancing in My Shoes, by Lashandra Hall

Favorite Beyoncé Song (other than “Sorry”): Wow, you really cornered me here.“Deja Vu” or “Single Ladies”

Best Piece of Advice: Go in with a positive attitude

Williams’s productivity techniques start with eliminating distractions. She recommends finding an aspect of the work that you love and diving into it. At times, it’s just plain-old fascination that propels her to productivity nirvana.

“I love looking at investment decks,” Williams says, her voice crescendoing in what can only be described as joy. “And meeting different founders, helping them bring their ideas to life.

“You really have to enjoy what you do.”

In 2019, collaboration is critical—even for a tennis star. “Tennis used to be a really individual sport,” Williams explains. “That’s completely changed. I’ve built a team that is with me for physical [training], for rehab, for coaching.”

To make sure her colleagues are aligned, Williams’s team ciphers everything through a mission statement. “Someone always set a mission for me my whole life,” Williams says, remembering those early years when she was coached by her father. “If I could do things over, I would create [my own] mission statement faster.”

“I want to hear what I’m doing wrong so I can improve and become better.”

That mission allows for faster decision-making and alignment. From personal trainers to dietitians, a champion’s team is a combination of extremely specialized individuals with a single objective—without a common goal, none of their work would occur in concert. “The second someone joins the team they know what we expect.”

But of all the valuable tools in Williams’s arsenal, her ability to solicit feedback is likely the most consequential.

“I tell my coach and my fashion team, don’t tell me what I’m doing right,” Williams says. “I want to hear what I’m doing wrong so I can improve and become better.”

As the youngest of five children, Williams says she’s accustomed to constructive criticism. In fact, it’s so important to her, she considers it table stakes to the companies asking her for help. And when it comes to offering others’ feedback, she points back to their mission statement. “This is our drive, this is what we want to do, and this is not in line with it. How do we get that in line?”

When pressed about why constructive criticism is so important to her, she offers a pragmatic answer. “There’s someone working just as hard as me, if not harder. They’re trying to beat me, and I need to always stay a step above.”

Whoever they are, they’ve got their work cut out for them. Because Williams isn’t slowing down, much less quitting.