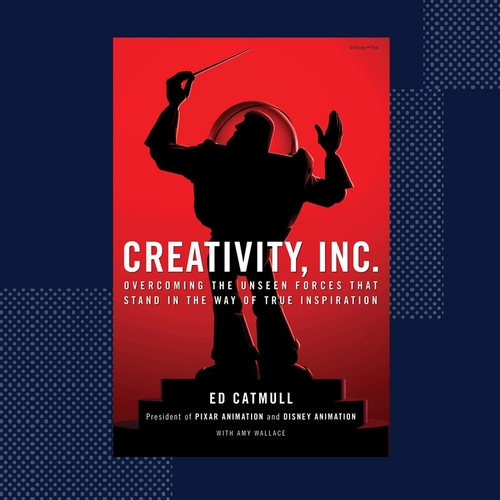 Given the sheer genius of so many of Pixar Animation Studios’ films—from Toy Story to Finding Nemo, Cars to Coco—it’s easy to assume the company’s creative process is a well-oiled machine. But that wasn’t always the case.

In his popular book Creativity, Inc., Pixar’s current president and co-founder Ed Catmull—who is one of the featured speakers at Slack’s upcoming Frontiers conference in San Francisco on Sept. 5 and 6—recalls how the group used to hold important meetings around one massive, almost comically long, rectangular table.

It was a totally ineffective for facilitating productive meetings. No one could hear anyone talk. The most “important” people were put in the middle, marked by oddly formal place cards. Eye contact was next to impossible as teams tried to pack into the overcrowded space. The table, the cards, the room—it all conspired to reinforce the hierarchies the leaders were trying to tear down.

Replace the table and solve the problem, right? That was the leadership lesson Catmull thought he was learning. But he later discovered that, as a leader, finding the right solution is rarely about executing the obvious.

“There is the problem you know you are trying to solve—­think of that as an oak tree—­and then there are all the other problems—think of these as saplings—­that sprouted from the acorns that fell around it,” he writes. “And these problems remain after you cut the oak tree down.”

What’s in store for Frontiers 2018

This is one of many insights shared in Catmull’s book, co-authored with Amy Wallace. Here are more of our favorite lessons about amazing teams, the power of failure, the benefits of continued learning, and more.

Assemble the best teams possible was Catmull’s early mantra when spinning up Pixar with co-founder Alvy Ray Smith. “Getting the right people and the right chemistry is more important than getting the right idea,” he writes.

The goal was to hire people smarter and more qualified than him. This takes leaders who are humble enough to admit when they might be outclassed by those reporting to them. The best workers lead to better work and better outcomes.

Fear of failure is another key theme in Creativity, Inc. Catmull asserts, “While we don’t want too many failures, we must think of the cost of failure as an investment in the future.”

As a result, he spends time helping recalibrate the reader so that failures are seen as opportunities and stepping-stones on the way to achieving goals, versus something to be avoided.

He also explains how the fear of failing can stymie teams. Fearing failure means teams won’t show work until they think it’s close to perfect, making it harder to fix problems since those projects are further down the path of development.

“While we don’t want too many failures, we must think of the cost of failure as an investment in the future.”

A creative team needs to iterate quickly, which means presenting work early and often. As Catmull says, “No Pixar movie ever started out as funny, heartfelt, and well-written as what we see in theaters. In fact, many of them were complete disasters at the start.”

In Catmull’s early years at Pixar, he felt an “open door policy” was a bold move that would give him access to anyone with an issue that he could help solve quickly. But he soon realized that no one ever reached out to him and the only thing that did work was his actively seeking out problems in open-ended 1-on-1 sessions. That’s where he’d get honest feedback and could spot any early warning signs of problems on the horizon.

Another pitfall was relying on hierarchies and process, in which lower-level employees who had an issue could speak only with their immediate supervisors, who were supposed to elevate it up the chain of command and across the team. “Anyone should be able to talk to anyone else, at any level, at any time, without fear of reprimand,” he writes. “We had made the mistake of confusing the communication structure with the organizational structure.”

Communication and the exchange of ideas needs to be unhindered for a team to be successful. Eventually, Pixar changed its culture to one where people in different departments saw themselves as peers, because they could connect with one another freely and often.

“Anyone should be able to talk to anyone else, at any level, at any time, without fear of reprimand.”

More open communication led to a desire to provide ongoing learning opportunities for employees at all levels through Pixar University.  Every employee at Pixar from top to bottom can take classes in their own field (or other fields) to help develop their careers however they see fit.

Great ideas can come from anywhere

“If there are people in your organization who feel they are not free to suggest ideas, you lose,” Catmull writes. “Do not discount ideas from unexpected sources. Inspiration can, and does, come from anywhere.”

To help staff and ideas grow, Pixar runs on a steady diet of daily review meetings, 1:1s, postmortems when projects are complete, extensive research trips before creating each film, and its ambitious Notes Day.

On Notes Day, Pixar shuts down all work for a day to facilitate brainstorming sessions throughout the entire company, where anyone can suggest new ways of working and solutions to current problems.

“If there are people in your organization who feel they are not free to suggest ideas, you lose. Do not discount ideas from unexpected sources. Inspiration can, and does, come from anywhere.”

Slack has followed Pixar’s lead on this. We threw our own version that we called Mission Control Day and wrote up ideas on how to host your own.

Our piece on how to run your own internal requests channel details another way to foster ideas from anyone inside a company.

Leadership is about protecting, serving, and developing others

The job of a manager, Catmull writes, is about supporting others, not seeking the spotlight.

His advice: Work hard to bring out the best in everyone while being on the lookout for any problems getting in the way of the goal. “My job as a manager is to create a fertile environment,” he writes, “keep it healthy, and watch for the things that undermine it.”

Excited to hear more lessons from Ed Catmull? See him, along with dozens of other speakers, at Slack’s Frontiers conference in San Francisco on Sept. 5 and 6.