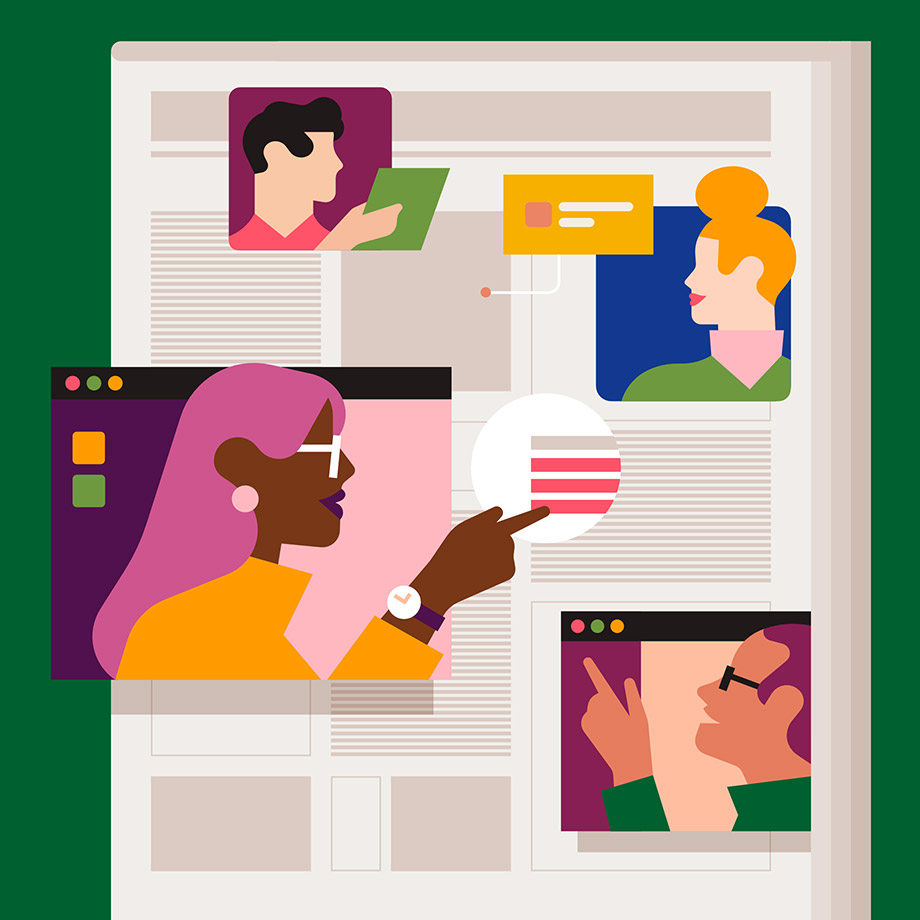 Breaking news: It’s what all journalists chase, often competing against each other for the top story. But in March 2020, the San Francisco Chronicle and Los Angeles Times changed the game to bring readers the most up-to-date facts, swapping competition for collaboration in Slack, the secure channel-based messaging platform.

Both California publications had been scrambling to accurately report on data from the Covid-19 pandemic, checking with 58 county health agencies and three city agencies across the state daily to confirm numbers. But the tedious process quickly sapped time and resources. Knowing they had been working simultaneously yet disparately on the same effort, the S.F. Chronicle and the L.A. Times began a statewide effort to produce a comprehensive Covid-19 data set together.

Both organizations were already using their own internal Slack workspaces, made up of Slack channels, to share messages, workplace automations, digital tools and files. So it was a natural next step to unlock the power of both publications by creating a secure shared channel with Slack Connect to work together across organizational boundaries and Slack workspaces.

In just two months, the #california-covid-data-coalition channel shared by the S.F. Chronicle and L.A. Times became one of the most reliable and trusted sources of Covid-19 data, expanding to include six additional newsrooms across California:

“Instead of running around collecting Covid-19 data, the most accurate information is now in one Slack channel,” says Evan Wagstaff, a senior interactive developer for the Chronicle.

“Collaborating in Slack gives us 50% of our time back and empowers each journalist to have an exponential impact across eight newsrooms.”

The Covid-19 project is just part of a Slack ecosystem that helps journalists at the Chronicle deliver the most accurate news possible. Integrated workflows, time-saving automations and channels drive faster and better results internally, ensuring that the publication continues to set a high bar for journalism.

“We’re laser-focused on providing the best content for our readers,” says Tim O’Rourke, the Chronicle’s director of product and strategy. “That’s so much easier when we can come together and work more efficiently in Slack.”

Unprecedented collaboration with other newsrooms in Slack

Now a well-oiled machine, the Covid-19 project effectively expands the reach of California’s most skilled reporters. Once-siloed journalists share information and collaborate in #california-covid-data-coalition, where each newsroom is assigned a different day of the week to run point on data collection.

The data, which includes statistics about everything from nursing facilities to beach closures, is uploaded to an open repository on the platform GitHub for anyone to use. To build this kind of community in a traditionally competitive media landscape signals a shift in the industry.

“Slack collaboration enables a new space, even for journalism,” says Wagstaff. “It’s great to be in Slack with all these different newsrooms, because we all have the same objective: to inform our readers what’s going on with Covid-19.”

With 50 journalists across eight newsrooms, the partnership:

The success of the project has set a new standard for external collaboration at the Chronicle as well.

“Slack Connect is our default now for partnerships outside the Chronicle newsroom.”

Even digital publications have physical newsrooms that thrive on in-person collaboration, especially when reporting a crisis. “Newsrooms are a really sacred place for us,” says O’Rourke. “A lot of us are journalists because of that camaraderie. It’s where ideas really come up from the ground.”

By keeping everyone connected and productive, and allowing teams to work efficiently in Slack, the Chronicle has transitioned to a way of working remotely that feels as natural as the newsroom. And to bring stories to life, the Chronicle gathers updated facts and figures at record speed in Slack.

“We have a #breaking-news Slack channel, where reporters, editors, producers and photographers immediately post updates,” O’Rourke says. “A reporter posts in Slack, and all of a sudden everyone’s in the same channel working to publish breaking news. The blend of original reporting with the ease of communication and automations in Slack is crucial.”

From there, channels like #wildfire-season and #election enable journalists to accurately cover every story. For evolving, volatile topics like Covid-19, earthquakes, fires and power outages, the Chronicle provides readers with detailed trackers online. To keep these up to date, it has a tool that scrapes feeds from specific public agencies. If that tool detects any changes, the Chronicle is alerted in a dedicated Slack channel to update the appropriate tracker accordingly.

“Our trackers listen to data feeds, almost like an automated reporter,” Wagstaff says. “And Slack is how that reporter talks to us.” If there’s a big earthquake, for example, the tool checks its location, proximity to a population, size and depth. “Once the data meets a certain criteria, it pings the producers in the #alert Slack channel. So we’ll know a couple minutes faster than if we were monitoring Twitter.”

To track viral stories, the social-media team monitors a select group of Twitter accounts and loops in the right stakeholders. “If they hit a certain threshold for likes and retweets, we’re alerted in the #producer Slack channel and can move fast to get the story out,” Wagstaff explains.

“We use Slack to bring folks together and communicate in a time where we’ve lost a lot of culture by not being in a newsroom. Everybody from the editor in chief to the reporters and photographers covering stories in the field use Slack.”

Automation frees up journalists to focus on the stories that matter

Automations in Slack empower Chronicle employees with a sense of autonomy, reducing the number of handoffs and resources spent creating projects. For example, when journalists want to commission a digital project, they fill out a new project request form in Slack using Workflow Builder, a no-code tool for automating daily tasks in Slack. After a journalist fills in specific fields regarding the size, scope and overview of the project, approvers are alerted in the relevant Slack channel, can ask questions as needed and press a button right in Slack to approve (or not).

From there, a series of templates allows journalists to create projects with limited oversight. To maintain the technical and editorial quality of each story, a Slack approvals workflow ensures that editors have visibility on every piece they publish. If anything goes wrong in the deploy flow, Slack is wired to ping the editors, who then jump in the #error Slack channel to address mistakes or roadblocks with the journalist. “We can then view and approve that piece to publish right from Slack,” Wagstaff says.

With endless digital news sources, phone notifications can quickly become overwhelming. So Wagstaff and his team built a Slack channel called #push-alert that aggregates updates in one place. “You still get all news updates from 150 organizations in your Slack channel but don’t have to bog down your phone,” he says.

Turning routine tasks into powerful workflows eliminates the need to switch between tools, letting journalists focus instead on the work that matters. Take the “Chronfeed”: Previously accessed via the web, it’s now piped into Slack.

“Producers see every story that’s been published right in Slack, then use emoji to drive the workflow forward,” O’Rourke says. “A custom Facebook emoji indicates the piece has been added to Facebook, a custom Twitter emoji for Twitter, and so on. Producers can effortlessly communicate without really communicating.”

“Slack automation really powers up the newsroom in a way we’ve never seen before.”

A better way to report the news across the country

After the Chronicle ironed out its best Slack practices, it was only a matter of time before they expanded to other Hearst publications nationally. “Slack simplifies the workflows we have in the newsroom,” O’Rourke says. “Once our digital teams set everything up, all the other newsroom departments in San Francisco started using it as a primary tool—along with most of the Hearst Newspapers division, from New York to Texas to Connecticut.”

Whether swarming a story internally or collaborating with other publications, the Chronicle’s human- and tech-powered newsroom capitalizes on the best of both worlds. “It’s not just the automations,” Wagstaff says. “It’s the people who get plugged into those automations that connect everything together. The readers want good journalism at the end of the day, and Slack helps us deliver.”

Reinventing Work: New Imperatives for the Future of Working

In the post-pandemic world, it’s time for your company to seize the opportunities at hand and reimagine what’s possible

How ViacomCBS empowers employees to reinvent the future of work