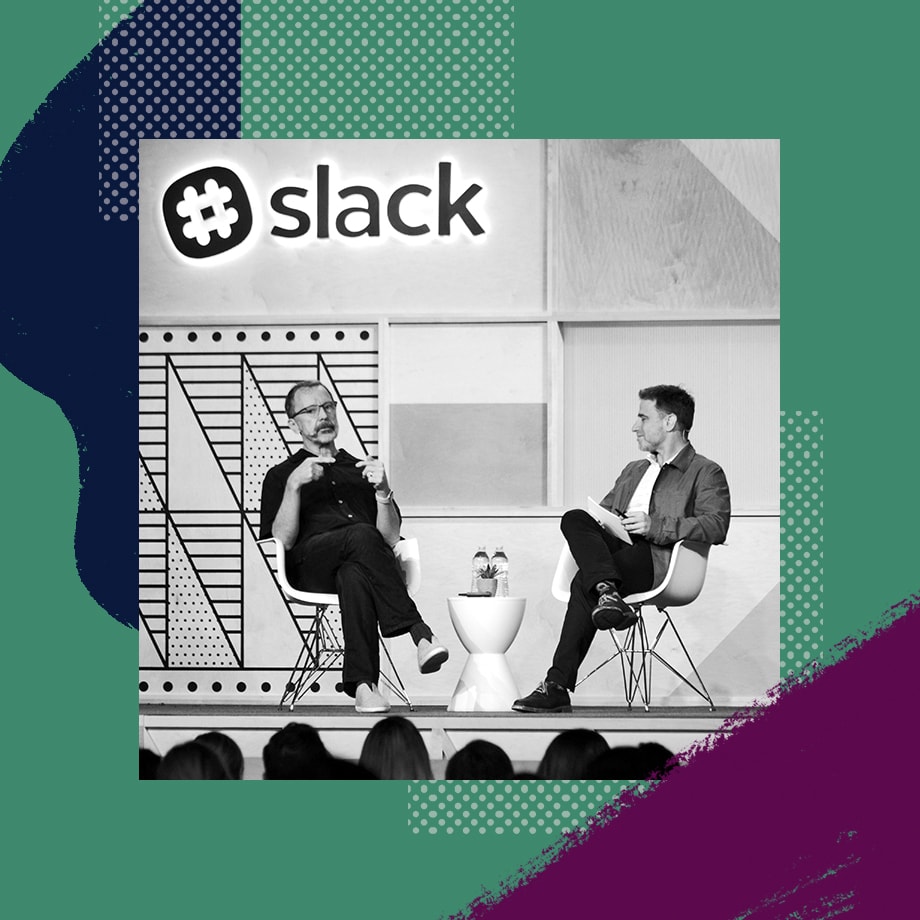 To hear him tell it, Ed Catmull propelled from computer scientist to president of Pixar Animation Studios by taking some fairly outrageous risks. But creating one beloved blockbuster after another for over two decades requires more than good luck.

At Slack’s Frontiers conference in San Francisco, Catmull sat down with Slack CEO Stewart Butterfield to talk about fear, taking chances, and the evolution of Pixar’s legendary brain trust.

Long before Woody and Buzz, Catmull was the director of a computer graphics lab at NYIT. He was tasked with hiring people to help run the lab and he’d found the perfect candidate, Alvy Ray Smith. There was just one problem. “He was more qualified for my job than I was,” Catmull says. “I felt this fear—if I hire this guy, my boss will realize.” But Catmull swallowed his pride and offered Smith the job. And things worked out—Alvy became his best friend and the co-founder of Pixar.

Hiring people who know more than you has been a valuable practice for Catmull. “It takes some confidence,” he admits. “I was rewarded for overcoming that fear.”

“Facing the internal fear changes you.”

Catmull was tested again in the late ’70s when LucasFilm contacted him—fresh off the release of a little film called Star Wars. George Lucas decided they wanted to bring more technology into the film industry, and they were interviewing a handful of individuals in the (still relatively small) computer graphics field. It was a dream job and LucasFilms knew it, so they asked each candidate an impossible question: “Who else should we talk to?”

The other candidates did the obvious thing—they didn’t give any names. “When they asked me the question, I just gulped, and said here are the other people you should talk to,” says Catmull. “I listed everyone else on their list, so they gave me the job.”

Catmull credits these “measured risks” as one of the major driving forces in his career. Taking these chances, and finding early success, reinforced his ability to take even more throughout his career.

“Facing the internal fear changes you,” he says.

Even a legendary “brain trust” can change over time

For years, Pixar’s brain trust has been a thing of legend. It’s a mythical group of storytellers who can transform an average flick into a box office hit. (Rhyme unintentional.) In his book Creativity Inc., Catmull deftly explains the trust’s purpose: to take films “from suck to not-suck.”

But the group’s notoriety became an impediment to their purpose. What had worked in the beginning—gathering the same people and perspectives—didn’t work as the company grew. So Catmull turned his eye on fixing that next.

Now, “the brain trust is not a group of people—it’s the name of a meeting,” he said.

The meeting only has a few basic rules, but the first is this: Remove the power structure from the room.

“Sometimes, magic happens. And by magic, I mean the ego has left the room.”

That means no one, from the creative director to Catmull himself, can override the production team who come in for feedback. The reason is simple: they already know something isn’t working—they don’t want judgment, they want solutions.

Catmull admits they don’t always get it right. “Every once in a while, it’s a friggin’ disaster,” he says. “But sometimes, magic happens. And by magic, I mean the ego has left the room.”

There are different kinds of failure

Catmull stresses the importance of collecting outside inspiration and feedback. That can only happen when employees feel safe to fail.

There are actually two types of failure, Catmull explains. There’s the business context, in which you learn from failures and grow from them. But the gradeschool version—the one he says we all grew up learning—is that you fail because you screwed up and you’re not smart enough.

No matter how many safeguards Pixar puts in place to encourage risks, employees will always have those worries. “There is a palpable aura of danger around failure,” Catmull says.

Catmull hopes the company’s films help prove its okay to take chances. “Not every film you take has to be high-risk. But you must make some that are high risk because it’s a message to everybody: that’s who we are.”

For Catmull, getting honest feedback has become more difficult over the years. Newer people are more likely to be cautious around him because of his status in the company. “Which means I don’t see as much as I did before,” he says.

Catmull combats these blind spots by enlisting trusted channels to speak openly to him. While those conversations can be difficult, Catmull finds these experiences immensely valuable. But he understands that his background and title mean there are things he simply won’t have visibility into. “No matter what my intentions are, there are just certain things that I don’t see and I don’t know,” he continues.

The best bet, then, is to foster an inclusive environment. Catmull encourages his leaders to draw in more people and cultivate ideas from absolutely everywhere.

“I do believe that everybody has the potential to be creative,” he says. And perhaps that starts with leaving our egos on the cutting room floor.

In the age of remote work, this insurance brokerage firm turned to Slack to accelerate business, leaving email and suite offerings behind

Power your remote sales and support strategy with Slack and Salesforce