Let’s say you have two employees facing an identical problem. They’re attempting to join a video conference, but the product you use is giving them errors.

Employee 1 feverishly emails IT support, then sprints to the IT desk after not getting an immediate reply. Employee 2, on the other hand, pulls up Slack, types a slash command, reports the incident and quickly sees it marked with 👀 from a member of the IT team.

So which employee had a better IT help experience?

Spoke, a software company that built an IT help ticket system of its own for Slack studied this very thing. After surveying hundreds of IT and HR service desks, Spoke found that when employees are given the option, people will submit 70% of their requests through Slack. 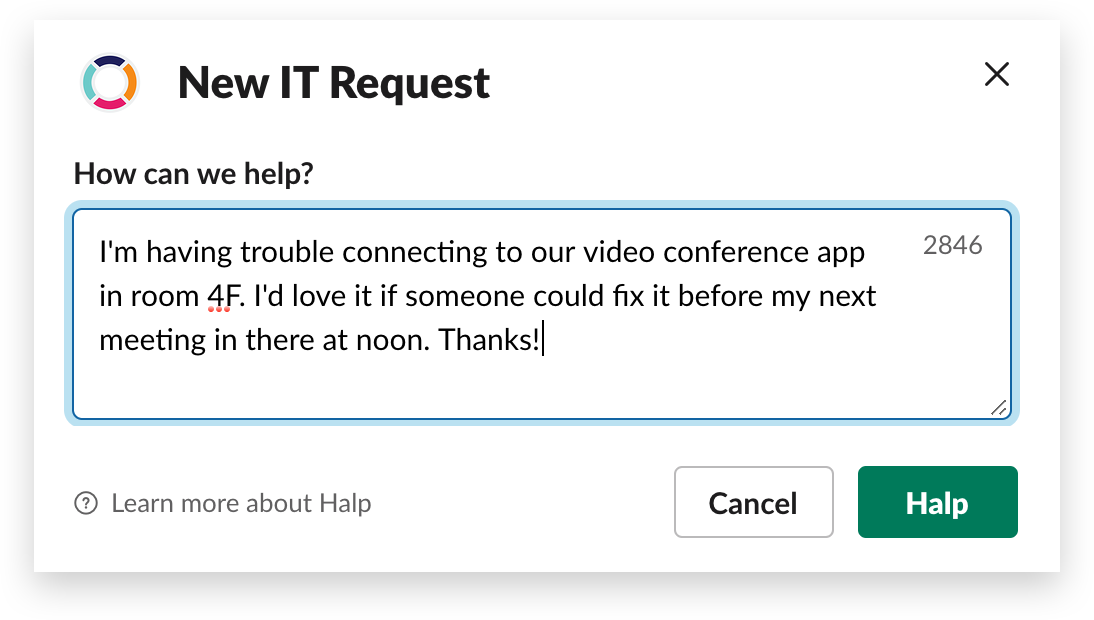 The ease of use in self-serve reporting also benefits the teams working to solve those same problems. Instead of a disorganized stream of people reporting problems across different systems, they’ll get a queue of tickets they can sort, prioritize, and track the status of at any time. Plus, Slack gives them an easy way to follow up when the issue is solved or they need more information to fix it.

Let’s look at the options out there for companies interested in rolling this out to employees.

Large organizations tend to build off existing products already popular for managing software projects. Systems built around tracking bugs can be tweaked to track IT help tickets, but these require some custom software development to tailor them to this purpose. 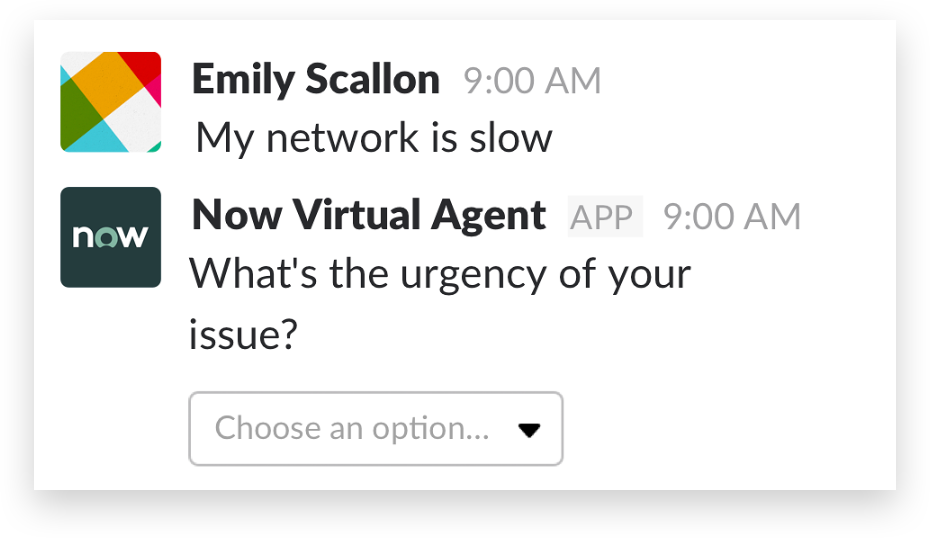 ServiceNow, a cloud platform that helps teams manage their IT needs, offers a bot called Now Virtual Agent for Slack that installs in Slack and can take natural-language requests like:

And those can be parsed into requests with automated replies that you create using Virtual Agent scripts. 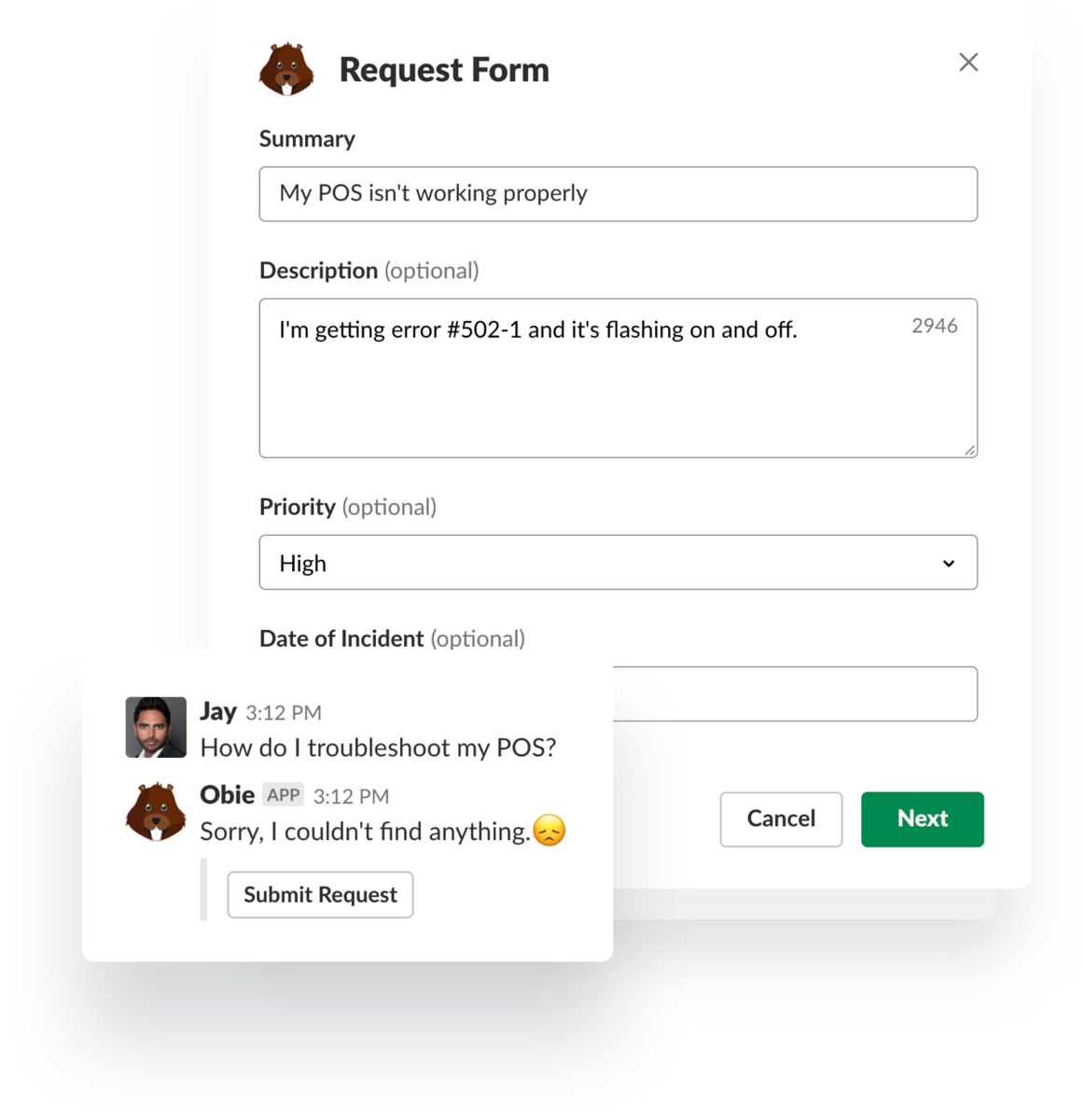 Jira software is one of the most popular suites for managing software development, and those same tools used to track bugs in apps can be repurposed to capture reports of IT issues with Jira Service Desk. You can use this Slack integration (along with helper apps like Obie to streamline reporting) to request equipment like keyboards or report service problems that are keeping people from getting their work done. From there, IT teams can respond to tickets and close them when solved, just like a software coding project in Jira. 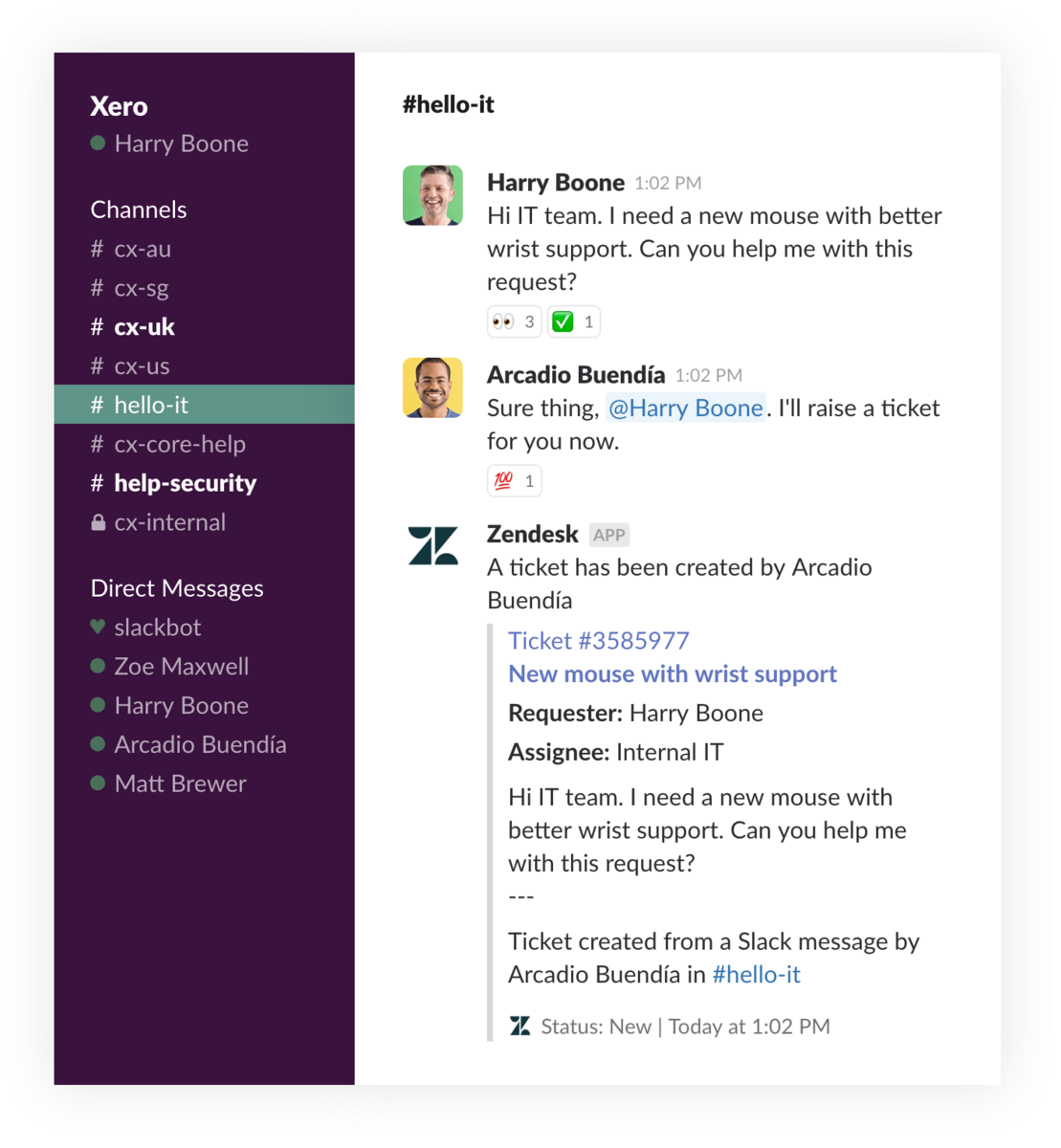 The IT team at Xero, a leader in cloud-based accounting software, uses Zendesk to track tickets in Slack. Read their story here.

It’s a similar story with Zendesk, a popular customer support ticketing platform. Those same tickets used for solving customer issues can be used internally to track IT requests made in Slack from your own employees. From there, IT teams work through issues and requests in the same kinds of queues that a support team would.

There’s a new app in Slack’s App Directory, called Halp, that’s basically a turnkey system for building a self-service IT help desk in Slack. In just a few minutes you can set up and configure it within Slack itself, and it’s an especially great fit for small businesses that might not have existing large-scale ticket tracking systems in place. 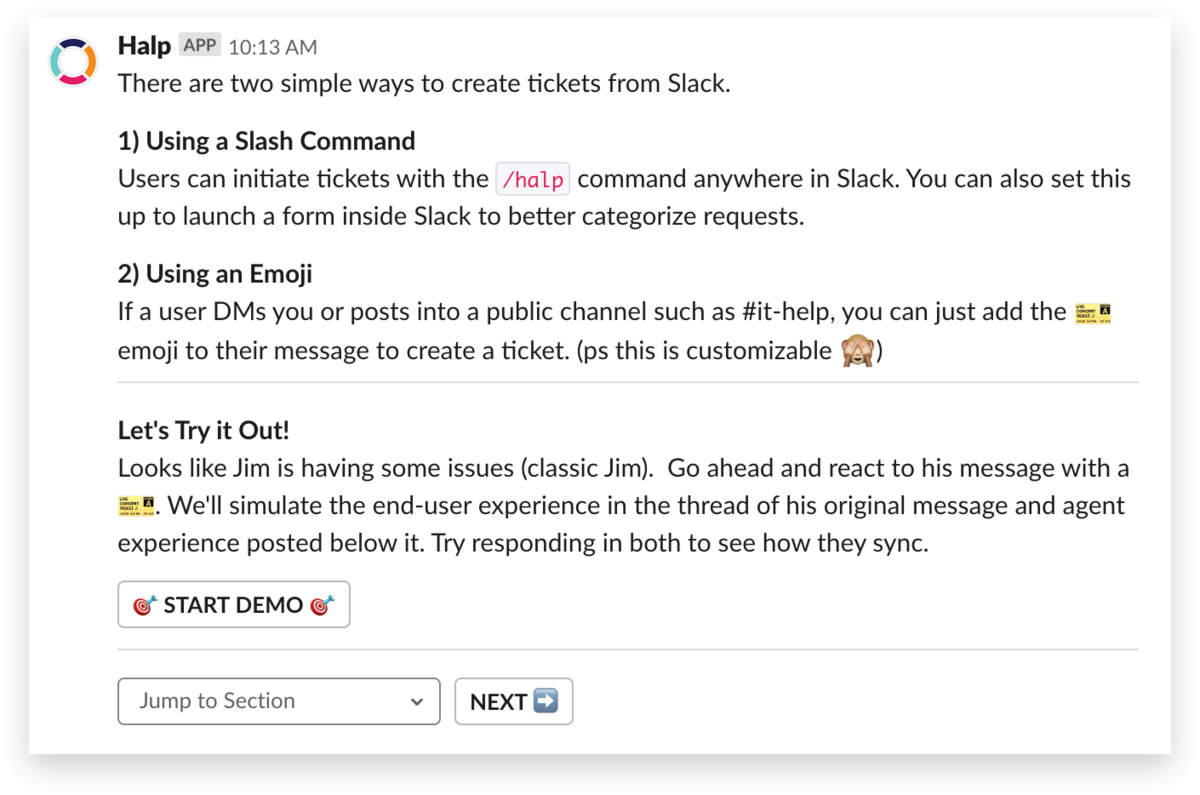 In its default configuration, any IT requests made in a channel (you could create #help-it for taking new reports from employees) or in DMs to IT team members can become a help ticket by just clicking a specific emoji reaction. Emoji reactions are configurable to let anyone mark off a new ticket or can be limited to members of your IT team.

Users can also use the /halp slash command to fill out a form with details about their issue. New requests from the form, or the contents of messages that got the emoji reaction, are instantly copied into a triage channel as a new ticket. 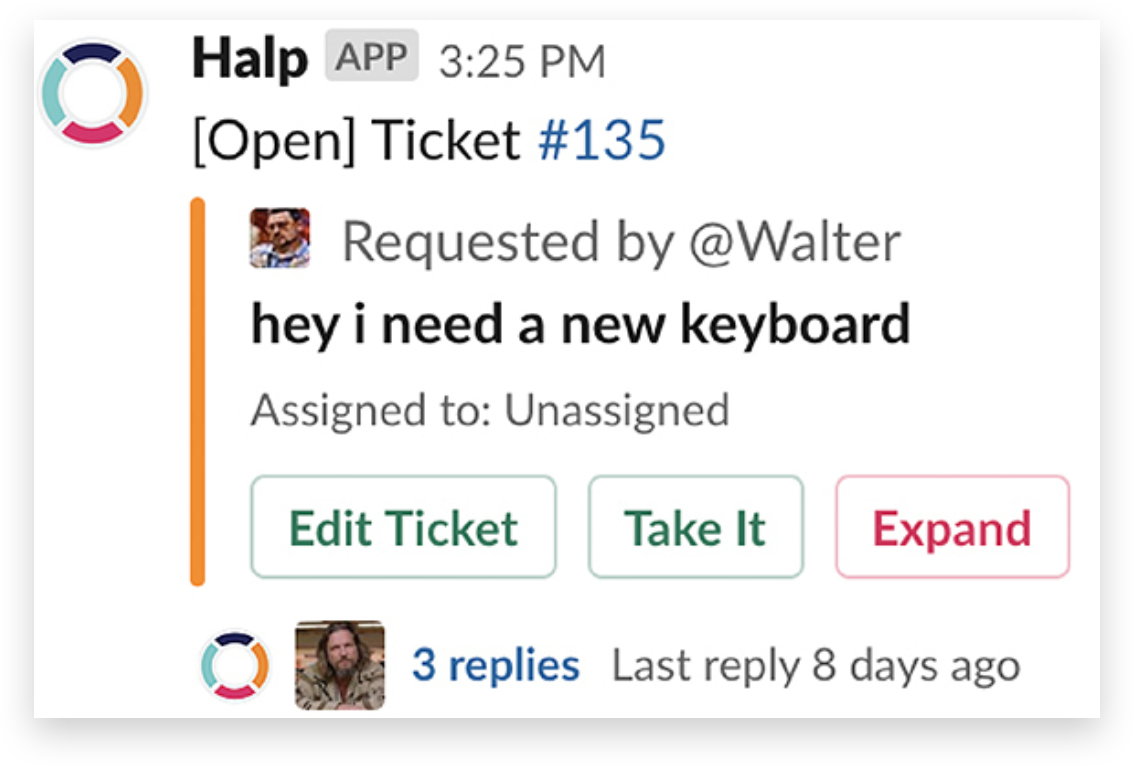 Your IT team can review their triage channel and claim new tickets in Slack. They can also ask for clarification in a thread, and any responses will post into DMs with the user. When a solution is found, the ticket can be marked as resolved either in Slack or Halp’s own web app.

Halp can offer up lists of unassigned and open tickets, as well as give IT team members an ongoing list of tickets they’re working on, all inside Slack. It also includes an email-based system as backup for taking new IT requests.

This type of self-serve system is a quick, efficient way to make your IT help desk accessible to users in Slack. They’ll be able to make requests and report new issues with minimal friction, just by sending a message or using a slash command, and a small IT team can troubleshoot and resolve those problems in their own private channels. On larger teams, dedicated offerings from ServiceNow, Jira or Zendesk can be tailored for enterprises that have thousands of employees staffed by larger IT teams with complex structures.

No matter which solution you choose for your company, having a self-serve help desk is win-win. Employees get an easy, direct way to request help or clarification. IT teams can sort, prioritize and solve problems in orderly fashion. And in the end, everyone has a better experience.

By using Slack integrations with Salesforce, Zendesk and MuleSoft APIs, Qumulo customer success teams save hundreds of hours a year