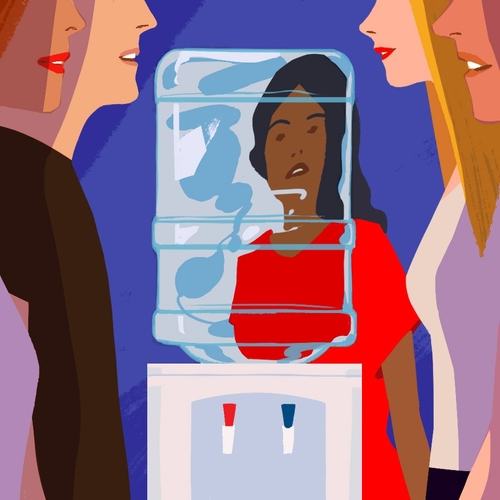 Think about the last day you spent in an office. No matter how recent it was, you probably can’t remember who you said hi to in the shared kitchen. Or who you asked to look over an email for you before you sent it off. Or who you interrupted in a meeting.

But no matter how long it’s been since you were in an office, you probably do remember if no one greeted you. If no one reached out informally to get your take on something. If no one let you finish what you were saying in a meeting.

We’ve written before about the fact that intentional ostracization by coworkers can be at least as damaging as harassment and about the value of creating psychological safety at work. But what about all the passive ways we have of leaving people out? What kind of impact does that have?

Diversity and inclusion specialist Annahid Dashtgard lays out the answer pretty clearly. “Moments of social exclusion register in the same part of the brain as physical pain, particularly for people who have experienced exclusion or marginalization before,” she says. “Whether in previous workplaces or in other parts of their lives, those micro-exclusions don’t get read as a one-off. They get read in terms of a particular history.”

Subtle yet harmful causes of isolation at work

Dashtgard’s sentiment is echoed by Tamara, a nonprofit program manager.

“I have had many issues with racism in my past jobs,” she says. “Most of them manifested as microaggressions and thus built up over time.” In her 2018 paper “On Microaggressions: Cumulative Harm and Individual Responsibility,” Christina Friedlaender defines microaggressions as “subtle yet harmful forms of discriminatory behavior experienced by members of oppressed groups.”

One type of microaggression is being expected to be a stand-in for an entire demographic of people. In Tamara’s experience as the only person of color in an office, she was expected to manage the relationship between her organization and the larger black community. Her attempts to address this with employers had mixed results. “I have tried to find an ally in the organization,” she says. “Or I’ve tried to raise management issues directly to the board.”

Tamara also uses every step of the hiring process to learn about a potential employer’s track record on inclusion. “What I learned from this experience is the importance of researching and interviewing the senior management team as much as they are interviewing me.”

Leading by example: Creating a safe and inclusive work environment

The situation plays out a bit differently when you are a manager yourself. Samantha Brennan is dean of the College of Arts at the University of Guelph, and even though she’s a manager, there are many ways in which she feels she doesn’t fit in.

“I’m a first-generation university student. I’m an immigrant to Canada. My mother lives with me. I ride my bike a lot. I don’t drink. But I suppose the fact that’s relevant here is that I’m bisexual.”

When Brennan started working at the university, she was expecting there to be a group for queer faculty, staff, and grad students. When she discovered such a group didn’t exist, she decided to start one. But she knows it’s not that simple in every case.

“As the dean, I’m clearly on the management side of the divide. I’ve got a lot of institutional privilege,” she says. “I recognize that’s not a strategy available to everyone. So as a group, the queer faculty and staff at Guelph who take part have asked ourselves who else might feel excluded. And what can we do to welcome and include others?”

This type of self-reflection is exactly what Dashtgard is hoping to see from people in leadership. She asks leaders to “look at who they are gravitating towards and leaving out, because unfortunately, they’re setting those patterns for the entire workplace.”

At the same time, she recommends coming at the issue in an open and forgiving way, rather than a punitive one. “The policing approach is the number-one enemy of inclusion in workplaces,” she cautions. “We just have to normalize mistake-making—and be willing to apologize and learn from our mistakes when they happen and give feedback on each others’ mistakes, but do it in a compassionate way.”

Preventing patterns of exclusion in the workplace

Approaching the problem with compassion and empathy can lead to some creative problem-solving. Tara works as a developer at Input, a company with a mix of remote and on-site staff. This can be challenging when it comes time for large group meetings that require remote workers to call into a conference room full of people.

“It’s impossible to understand what people are saying if folks are talking over each other, and even more impossible to be heard in those situations,” Tara says. “And forget it if two conversations break out independently. Anyone who’s remote is 100% out of luck at that point.”

To prevent a pattern of exclusion during meetings, her company took a surprising step.

“What I’ve seen work well is to have everyone act as if they’re remote. Everyone calls in, and everyone has video on,” she says. “It puts everyone on the same playing field, so it’s not othering for the remote employees, like calling into a conference room can be.”

Reaching out to bring others in

Alicia, a manager at a tech startup with a large international staff, emphasizes that transparency in communications is key. “I’m fully transparent with how I feel about management decisions to my team, even if I disagree with the decisions being made, because it shows that I’m being honest and I trust them.”

She knows the stakes are high because feelings of exclusion—whether active or passive—can cause employees to disengage with their work. A recent study, “The Impact of Inclusion or Exclusion on Distributed Global Teams,” showed that staff who feel disconnected from their global organization are less optimistic about the future of their company.

“If an employee decided to leave to go elsewhere, they’re sacrificing the years of experience they’ve built up to start somewhere fresh from the bottom,” Alicia says. “From a management perspective, there’s also the risk of losing your top talent because they feel excluded.”

A study by the Center for American Progress found that turnover costs are often estimated to be 100% to 300% of the base salary of the replaced employee, depending on wage and role.

It can be hard to check in with ourselves to uncover the unintentional ways we might be leaving people out, and harder still to reset that behavior. But the next time you’re in a work situation, take some time to look at the people around you. Ask yourself:

Reaching out to learn this kind of information not only makes your workplace more inclusive but can also be illuminating. In trying to ensure that there’s space for differences, we can end up discovering unexpected similarities—including the shared experience of feeling out of place.

“It’s interesting when you drill down and everybody starts to talk about the fact that at some point or another, they have felt like they’ve been excluded,” says Dashtgard. “It becomes this incredible opportunity for everyone to be part of this conversation, and with awareness, we can shift our micro-exclusions to micro-affirmations.”