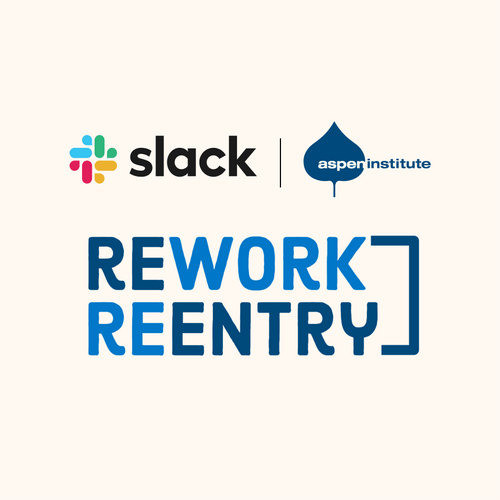 Dan Porterfield, president and CEO of the Aspen Institute, said, “Society places significant barriers in front of formerly incarcerated individuals, especially when it comes to securing stable, gainful employment. It’s exciting that Next Chapter and Slack for Good have pioneered a new approach to addressing this critical issue, starting in the tech sector, and the Aspen Institute is honored to collaborate on this initiative.”

Stewart Butterfield, CEO and co-founder of Slack, said, “This initiative builds on our long history of advocating for justice-impacted individuals and advancing diversity, equity, and belonging within the tech sector. We’re honored to collaborate with the Aspen Institute to deepen our work in this area and help scale the blueprint we’ve developed to additional hiring partner companies.”

Today’s launch of Rework Reentry coincides with the announcement that Next Chapter has expanded to 14 hiring partners, with the addition of PayPal, Asana and Stash. Also today, Slack announced a new documentary short film series called Home/Free, produced by Slack for Good in partnership with Next Chapter, FREEAMERICA and the Equal Justice Initiative.

Next Chapter provides returning citizens with access to skilled, high-paying jobs in tech

Almost two million people are incarcerated in the United States today, 95% of whom will one day be released. All told, an estimated 19 million Americans are burdened with the collateral consequences of a felony conviction. Due to stark racial inequities in the U.S. criminal justice system, this burden disproportionately falls on people of color.

Upon release, formerly incarcerated individuals are often limited to low-paying jobs with little opportunity for long-term career advancement. Research shows that a lack of stable employment drastically increases the likelihood that an individual will return to jail or prison, making joblessness a leading predictor of recidivism. This vicious cycle of release and poverty hurts everyone, including re-entering individuals, their families and communities, employers and taxpayers.

Next Chapter was established in 2018 by Slack and its non-profit partners The Last Mile, W.K. Kellogg Foundation and FREEAMERICA to help break this cycle by creating pathways for formerly incarcerated individuals to obtain skilled, high-paying jobs in the tech sector. Individuals who are selected to participate in the eight-month program enroll in a paid software engineering immersion program and complete an apprenticeship at one of Next Chapter’s hiring partners. Central to Next Chapter’s model is the comprehensive support provided to both apprentices and hiring partners in collaboration with the program’s network of non-profit partners. Apprentices receive professional and technical mentorship and individualized reentry services, while hiring partners are counseled on how to create a more equitable, supportive workplace for those returning home from incarceration.

After an initial pilot at Slack, Next Chapter has since expanded to 14 hiring partners. Three cohorts of apprentices, more than 30 individuals total, have successfully graduated from the program. Every apprentice has received a full-time employment offer after completing their apprenticeship, allowing them to quickly climb onto the career ladder at some of the nation’s fastest-growing tech companies. With this success, Next Chapter—which is now a fiscally sponsored project of Tides Center—is poised to grow to additional companies across the United States.

Deepti Rohatgi, executive director of Slack for Good, said, “Our program is transformative not just for apprentices but also for participating companies, which gain talented, loyal engineers and demonstrate through their investment in this program that they are serious about putting their values of equity and inclusion into action.”

Kenyatta Leal, executive director of Next Chapter, added, “We’ve built a blueprint that works. The question now is: how can we scale this model so that more people who have served their time and proven they have what it takes to turn their lives around can get a real shot at the American dream?”

There remain challenges to scaling Next Chapter across the tech sector, including legal and HR hurdles within companies, challenges reaching and raising awareness among justice-impacted people about career opportunities in tech and resistance among some employees to working alongside individuals who have been convicted for serious offenses. To address the many facets of this complex issue, Rework Reentry’s work is focused on three main areas.

How you can help

For more information on Rework Reentry and how you can help build career pathways for returning citizens, visit the initiative’s online learning space at reworkreentry.org or visit nextchapterproject.org.

In July, the Aspen Institute’s Criminal Justice Reform Initiative will present the webinar, Breaking the Record: New Job Pathways for Returning Citizens, a conversation featuring executives and advocates committed to creating employment opportunities for formerly incarcerated individuals. Details about upcoming virtual and in-person events can be found at reworkreentry.org.

If you are interested in bringing Next Chapter to your organization, or would like to apply for an apprenticeship, please contact Next Chapter at info@nextchapterproject.org or Slack for Good at slackforgood@slack.com.

Senior executives at tech companies who are interested in joining special convenings on this issue are encouraged to contact aspendigital@aspeninstitute.org for more information.