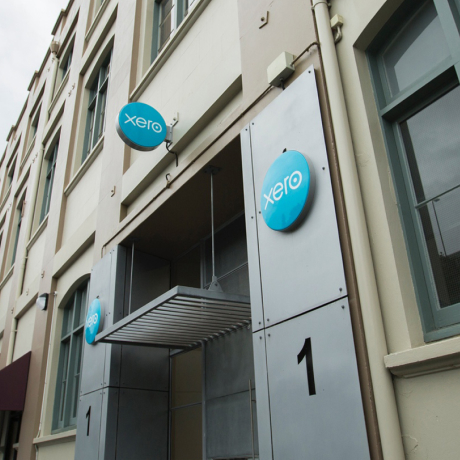 If small business is the backbone of the global economy, then Xero—a worldwide leader in cloud-based accounting software—is a chiropractor, keeping it aligned. Xero offers streamlined invoicing, payroll, and inventory services to nearly 1.6 million subscribers across the globe. Ranked by Forbes as the World’s Most Innovative Growth Company in 2014 and ’15, it’s now available in over 180 countries for all types of small businesses, from Amazon sellers and nonprofits to cafes and startups.

Headquartered in Wellington, New Zealand, Xero’s 2,300 employees are as global as its customer base, with outposts in Australia, Canada, Hong Kong, Singapore, the United Kingdom, and the United States. Until late 2017, teams at Xero were using just about every messaging tool available: Yammer, Flowdock, Google Hangouts, Skype. But nothing was interconnected or facilitated cross-functional collaboration, and information was collected and distributed in silos. “We never had a cohesive communications product across all of our business units,” says Grant Foster, an internal applications specialist in the IT department. “It was just a bit clunky and old. One of those things you’d check because you had to.”

The Xero IT team knew it needed one universal platform for collaboration and conversation, so it experimented with Slack by rolling it out to its product teams. Three months later, not only had the entire company been onboarded, but Slack had quickly become Xero’s wall-to-wall communications tool of choice.

“We never had a cohesive communications product across all of our business units.”

When a small business’ finances are at stake, a few minutes can be a big deal. Comprised of various specialists trained to address all manner of customer questions, the Xero customer experience (CX) team previously relied on emails to share guidance and documentation. Matt Simpson, a lead workflow coordinator (WFC), explains that those emails, “Got lost. They were just here, there, and everywhere.”

Today, CX has 30 to 40 Slack channels dedicated to each specialist group and the customer support flow is smooth, streamlined, and supported. For example, when an agent needs guidance, he or she simply mentions @coreseniors in their specialty channel, which notifies every senior online in the group. Whoever picks it up reacts with an emoji to indicate they’re on it. Then they’ll jump into a thread to discuss it, or talk face to face. “Agents can move on to the next customer,” says Simpson. “That means our customers are actually getting quicker answers. That’s huge.”

Harry Boone12:04 PMHey @Lisa Zhang. Yes, multi-currency could be a factor on this case.
✅1

As a WFC, it’s Simpson’s job to ensure that the CX team keeps to the response times promised in its service-level agreements. Often that means being the liaison between a frontline agent and a specialist who can give the insight needed to close a case. Before Slack, this could cause a huge bottleneck: If Simpson wasn’t around, the next-in-command might be unclear, and questions would pile up in an unproductive Yammer group chat.

Slack helped Simpson scale his operations in a way that didn’t leave anyone—or any problem—behind. It’s all thanks to a custom bot called Kevbot. To start, you open a direct message with Kevbot and ask, “Who’s the current WFC?” Kevbot will list the WFC, leaving you free to ask that person any questions. Similarly, the bot can recognize keywords and route reps to the right specialists.

In the end, it gives Simpson peace of mind: “I don't have to go back three or four hours and pick up any of the lost work.”

“I've got the peace of mind that there's been someone online, and that people were going to the right person at the right time.”

On a busy weekday in late January 2019, Xero’s office printers went down... globally. Unlike past incidents; however, there was no frantic scramble around the office to find triage resources. Instead, the IT team turned to a custom-built Slack tool called Multivac.

Multivac manages both Pagerduty integrations and Xero’s incident management workflow. When there’s an incident, Multivac will spin up a new channel, pull the right people in, and assign an incident commander through JIRA. A lead from CX can then jump in and start triaging the problem. In the end, the tool allows any incident management team to complete the task at hand without sending anyone into a panic or losing a huge chunk of time. “It’s something that Xero’s never had before,” says Foster.

Harry Boone1:02 PMHi IT team. I need a new mouse with better wrist support. Can you help me with this request?
👀3✅1

For flagging internal incidents like this, Foster has integrated Slack with Zendesk. When an employee comes to the #hello-IT channel for help and the team can’t answer with a short reply in thread, he can create a Zendesk ticket right in Slack. That means no context shifting from one application to another, and fewer interrupted workflows.

Meanwhile, for smaller requests, Foster’s team uses simple emoji reactions to keep everyone in the know. Instead of replying with a new message each time, eyes (👀) let people know the IT team is aware of the issue, a wrench (🔧) indicates the team is working on it, and a tick (✅) says it’s resolved.

A dedicated home for security issues

Security Engineering Team lead Rupert Bryant-Greene spearheads one of seven security teams that need high visibility and efficient communication channels. To answer questions about security and infrastructure, the team started a #help-security channel. With all 60 security employees available in one place, they’ve sped up their response times. “No matter what happens or what the question is, someone will see it and be able to get it to the right person,” Bryant-Greene says.

The channel is now the main resource for employees to gain insight on what’s happening in security. In fact, Bryant-Greene’s team has built a bot for the channel, Wheatley, to answer the most frequently asked questions. Need access to particular system? Need some insights on infrastructure? A quick DM to Wheatley pulls a scripted answer, along with links to Xero’s Confluence pages to learn more.

Wheatley APPHi there! I see you posted in #help-security.
Here's a quick rundown of the different teams you can reach out to depending on your needs:

@sec-advisory - the Advisory team for help making the right choices and decisions within policies and regulation.
@sec-architecture - the Architecture team for technical questions or advice about design and implementation.
@sec-iam - the Identity and Access team for AWS Access, DUO, RDP, and other access-related issues.
@security-engineering - for WAF, Proxy, CDN, KMS and other infrastructure-related issues.
@sec-risk - the Risk team for security governance, risk, and compliance.
@sec-ops - the Operations team for breaches, incidents, and other operational issues.
🚨 In the event of a security incident please follow the reporting guide here: https://teamxero/SecurityReporting

Not only does Slack make Bryant-Greene’s team quicker, but it broadens its scope. With security questions being raised and answered in a public channel, small problems are spotted before they snowball. “Say someone asks a seemingly benign question that may allude to something being set up wrong, or maybe something is visible that shouldn’t be,” says Bryant-Greene. “We have a lot more eyes on the issue at the same time without having to take anyone away from their desk.”

“We have every member of security in one channel, so there’s a really fast response time.”

Bringing teams together through wall-to-wall communication in Slack

Before Slack, Xero’s teams were working in silos, which made it difficult to locate information. Today, everything happens much more organically, and teams are empowered to find existing answers and eliminate redundancies. “We see people from outside our own teams linking directly to previous conversations,” says Bryant-Greene. “Having that functionality keeps us from recreating the same answers.”

Foster notes that Slack has holistically reshaped comms at Xero. Externally, teams at Xero take advantage of Slack’s shared channels feature to collaborate directly with partners. Internally, says Foster, “It’s been life changing for us within the IT team, because we’re able to connect with the whole business rather than just individuals.”

Before, connecting at Xero was an exercise in individual networking. If Foster wanted to talk with someone in HR, he’d go to that one person he already knew. Now, “Slack has opened that [conversation] up to everyone,” allowing teams to stay connected as Xero grows.

Available to all teams at Xero, Slack is a now a fundamental tool for CX, platform services, product teams, and more: More than 2,300 active users upload over 1,200 files, utilize 600 apps, and send more than 58,000 messages daily. It’s revolutionized the way teams communicate within the company—and led to a better customer experience for Xero’s 1.6 million subscribers.