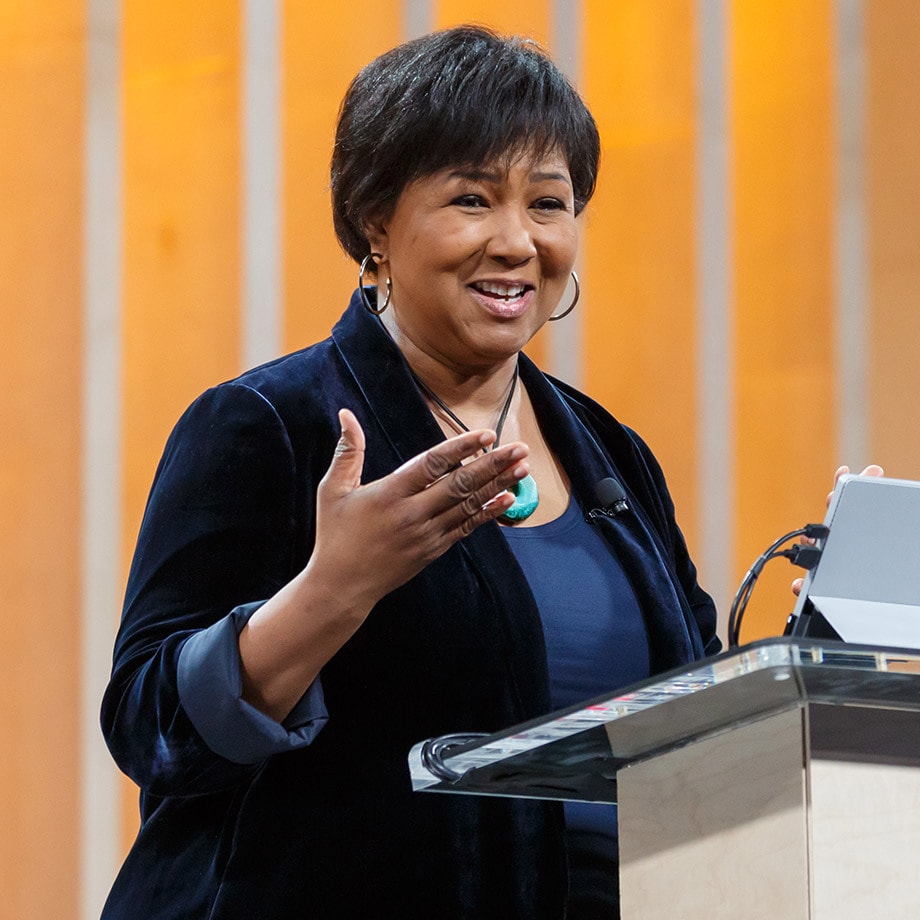 If anyone knows about the value of great teamwork, it’s Mae Jemison. The physician and engineer became the first woman of color in space aboard the space shuttle Endeavour in 1992, on a joint mission between NASA and Japan’s space agency, JAXA. Before that, she was a Peace Corps medical officer battling infectious diseases in West Africa.

Now, as head of the DARPA-funded 100 Year Starship project, Jemison is in charge of dreaming up initiatives that will eventually position humanity for interstellar travel. And as she explained in a keynote speech at Slack’s 2019 Frontiers conference in San Francisco, that challenge requires radically reimagining the kinds of expertise that will be needed for long-range space exploration.

Onstage, she shared the wisdom she’s gathered over the past three decades of pulling off mind-boggling feats of cooperation and leadership, as well as taking big, world-changing risks.

“We don’t do stuff anymore where an individual gets to say, ‘That was all mine.’ We all work in teams.”

In today’s world, almost nothing great is achieved alone. “The first picture of a black hole, over 100 people are cited for being able to make that picture,” Jemison said, referring to the immense international collaboration required to produce the landmark feat. “We don’t do stuff anymore where an individual gets to say, ‘That was all mine.’ We all work in teams.”

She pointed to her team’s proposal for the 100 Year Starship project on how humans could reach Alpha Centauri, the closest star system to ours, more than 25 trillion miles from Earth. Titled “An Inclusive, Audacious Journey Transforms Life Here on Earth and Beyond,” it encapsulates Jemison’s holistic philosophy toward interstellar travel.

“Across ethnicity, gender and geography, and also across disciplines, you’re going to need a really big team that includes all of human experience to do something like this, to make it happen, to make those capabilities exist,” said Jemison.

She looks to her own path as a proof of concept. Who and what would be excluded from the future of humankind had she not brought her broad worldview and experiences to the teams she’s worked with?

“Everybody said, ‘Hey, you’re the first woman of color in space, you have degrees in engineering and all these other things—what will you do with your place at the table?’ ” she recalled. “What difference would it have made if I had become an astronaut and didn’t use the experience that I had of living in West Africa? If I didn’t bring [my different experiences] to the questions that were asked in space exploration?”

“Part of being a leader is knowing how to follow folks as well.”

According to Jemison, being on a team is a marathon, not a sprint. So leaders need to learn how to keep propelling their team toward the finish line, even if that means handing off the leadership mantle to another teammate better equipped to get them there.

“Teams evolve, [and] you can’t always be the leader,” she said. “Sometimes you’re the leader, and sometimes you have to step back and follow because other people know a whole lot more about something than you do or they are prepared to lead at that point in time. Part of being a leader is knowing how to follow folks as well.”

That’s why Jemison strives to create a great teamwork environment in which challenging viewpoints and various perspectives are welcome. “I always like to bring in people who I won’t necessarily know what they’re going to say [but] they’re going to push me to think harder,” she said. “You need that creative energy [of] a whole bunch of people in the room who may or may not do everything you want them to do, but as long as you have a goal that they agree with, then you’re able to work with it.”

With ambitious ideas, a rising tide raises all boats

While the 100 Year Starship’s long game is to get humans to the neighboring solar system, its more practical goal is to ensure that we’re researching and innovating in all the right fields—and that we’re working together, cross-functionally, to achieve the great teamwork and self-sufficiency that a 4.2-light-year trip will require.

That interdisciplinary top-level collaboration will yield rolling benefits for humanity in the meantime. Just as space exploration has already led to revolutionary technology like MRIs, weather satellites and smartphones, pursuing interstellar travel demands that we invent new kinds of propulsion, develop self-sustaining agriculture, and learn more about human behavior than ever before. 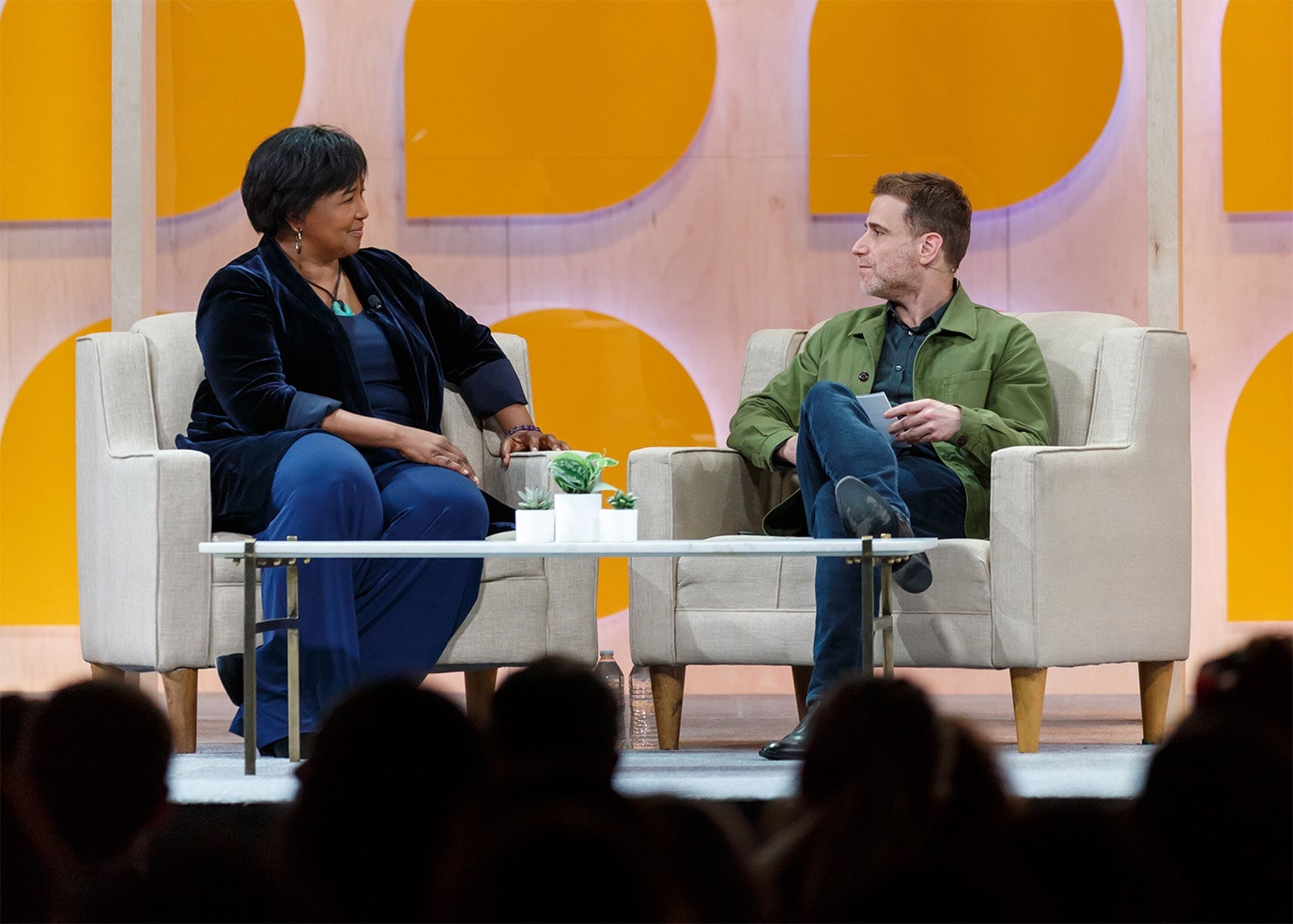 Great teamwork helps you take the risks that are worth it

“I’m a big chicken. I don’t like heights,” Jemison admitted, getting a laugh from her audience. “I had to ask myself, ‘Am I going to let my fear of heights keep me from doing things I want to do? Am I going to let whatever I’m afraid of hold me back?’ No, that’s not that important to me; it’s more important to be an astronaut.”

The risks, she said—which were doubled when the Challenger mission exploded shortly after she first applied to the program—were calculated ones. After all, she had support from dedicated teams of scientists, technicians and fellow astronauts to get her into orbit. And now, thanks to past risks, she’s able to use the experiences she gained to ensure the future of humanity with the 100 Year Starship.

Although Jemison’s mission to the next star may be a complicated, decades-long endeavor, the prospect hardly daunts her. When asked by Slack’s CEO, Stewart Butterfield, about the best advice she’s ever received, her response was simple: “Have a sense of humor. And if you’re bored, it’s your fault, because the world is endlessly exciting, and it means you’re not paying attention.”