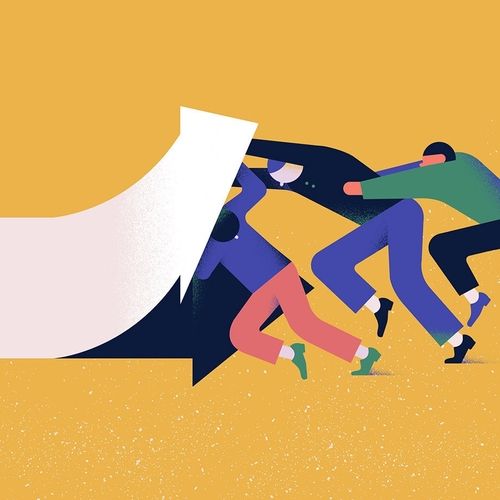 Decision-making can sometimes feel like a magical, mystical process, but it’s actually a science. If your own team struggles with group decision-making, take comfort in the fact that you’re not alone. Consulting firm McKinsey found that 72% of senior executives thought their companies made bad decisions as often, or more often, than good decisions. Poor or delayed decisions come with considerable costs too, not only in lost profits, but also wasted time, talent, and resources.

Psychologists and economists have studied the numerous obstacles behind any group decision-making process for eons, inspiring them to develop strategies on how to navigate them. If you’re looking to help your team make better decisions together, you might want to give these ideas a whirl.

Many group decision-making meetings are doomed before they begin. Unclear roles, missing information, and a general lack of team alignment can all foil the decision-making process. Fortunately, one of the simplest things you can do to help your team members get to a decision is to prepare them to make one.

Involve the right people. If your decision makers are too similar (in role, seniority, or perspective), your decision will suffer. Diverse groups are better at making decisions because they bring different views to the table. Many companies suffer from an “inclusion gap,” where decision-making teams are more homogenous than the overall organization.

Come ready to decide. Aaron De Smet, senior partner at McKinsey, differentiates between information-sharing meetings and decision meetings. Organizations frequently intend to have decision meetings but then the group gets sidetracked by information sharing: too many questions, discussions, and clarifications.

To accelerate the decision-making process, provide key information in advance and ask everyone to come prepared with ideas and proposed solutions.

Check job titles at the door. To ensure that everyone can share ideas and opinions freely, it’s important to value people equally, regardless of their role or experience. You can help to accomplish this by defining ground rules for discussion, such as:

How to make good decisions as a team

Every decision is different, and there’s no one formula for a perfect discussion. But in nearly every situation, following these steps will help you settle on a way forward.

Define the problem, not the solution

How you frame an issue will affect how others think of ideas to address it. If your framing is too narrow (“Should we change our customer satisfaction survey?”), you’re limiting discussion before it’s even begun. Ohio State University professor Paul Nutt found that 70% of the time, leadership teams consider only one alternative, even though having more than two options on the table drastically improves the quality of decisions.

Instead, be clear about the challenge but open-ended about the possible solutions (“How can we better understand our customers’ needs?”), so that you’re not steering the team toward a preconceived conclusion.

We’re all wired to follow the crowd, which often leads to flawed group decision-making. Social scientists have found that the first person to speak (or the first idea that gets early support) has a strong influence on group decisions because people tend to want to agree with each other. In other words, the first proposed solution may end up being chosen, even if it’s not the best.

To stop brainstorming from becoming groupthink, encourage group members to be open and honest, and to disagree with each other respectfully. Team leaders should model this behavior by asking probing questions of everyone, like “Tell me why you think that?” and “Can you share evidence to support that belief or hypothesis?”

When Larry Page stepped back into the role as CEO at Google in 2011, one of his first priorities was tamping down on “consensus culture” and restoring agility and efficiency in group decision-making. In a company-wide email, he declared, “Every meeting must have one clear decision maker. If there’s no decision maker—or no decision to be made—the meeting shouldn’t happen.”

Why? Because consensus, by its nature, is slow. When you make decisions too slowly, you minimize the risk of making a bad choice but also let opportunities pass you by. That’s why Felipe A. Csaszar and Alfredo Enrione, experts in business strategy, advise weighing the impact of an omission error (missing an opportunity) against a commission error (making a bad decision that seriously hurts the company).

They recommend teams only strive for consensus when the potential harm of a bad decision is much greater than the cost of missed opportunities. When Google stopped aiming for consensus, they were able to seize more opportunities for action, releasing more than 100 Google+ features in just 90 days.

Although decision-makers get the last word, they still need to assess the concerns and ideas of dissenting team members. A decision-making checklist can help the group leader ensure that they’re considering all relevant risks and points of view, and also offer members transparent information about how the decision is being made—something most employees value highly.

Often, it’s not your team’s decision that leads to failure, but the problems that arise when you try to act on it. Nothing zaps motivation like realizing your team has vastly underestimated the time and resources necessary to tackle a project.

Many teams fall prey to the “inside view,” and make an idealized plan that fails to account for unanticipated but inevitable delays. Creating timelines is necessary for moving decisions forward, but if they’re too optimistic, groups will become discouraged when things begin to drag.

Make sure you’re setting achievable goals to avoid this scenario. Base your estimates on the duration of similar projects rather than on guesswork. If you can’t find comparisons, your team should make at least two estimates: the best-case scenario, and the worst, where you list everything that could go wrong. Expect the reality to land somewhere in the middle.

Every stakeholder should also be clear on what they need to do to meet these deadlines. Make sure one person is responsible for documenting tasks and action items and sharing them with the rest of the team.

Not every decision requires this kind of in-depth consideration. According to Parkinson’s law of triviality, organizations disproportionately spend time on minor decisions, instead of focusing on significant ones. Figuring out which decisions to deliberate over as a group versus which ones to make quickly will free up important time and resources.

Amazon CEO Jeff Bezos accomplishes this by dividing all decisions into two categories. “Type 1” decisions are permanent, whereas “Type 2” decisions are reversible. Bezos argues Type 2 decisions should be made as quickly as possible because even if they fail, your team will learn something important from them that can help inform future decisions.

Using a framework or model for decision-making can help your team reach an informed, actionable decision while avoiding some common obstacles.

The ladder of inference tool encourages all members to question their beliefs and reasoning, and roots out flawed reasoning or incomplete data. It’s useful for teams that want to explore multiple possibilities and solutions to a problem while keeping conversations productive and on track.

The nominal group technique fosters equal participation and critical thinking by requiring each member of the team to write down an idea or proposed solution. Then all ideas are presented to the group, discussed, and ranked by vote. This can be helpful when there are unequal power dynamics in the group, for example, when one member speaks more than others, or when junior employees might be hesitant to speak up.

The RAPID model, developed by Bain & Company, helps teams identify who should have ownership over different parts of the decision-making process and push stalled projects forward. Team members are divided into five roles:

The responsibility assignment matrix (RACI) moves projects forward by breaking them down into tasks and with each stakeholder assigned to one of four roles for each task:

All team assignments are documented in the matrix, with team members listed along the top of the chart and all tasks listed along the left-hand side. Cells are filled in as team members are assigned to roles. This visual diagram makes it clear who is responsible for what and also allows teams to see that workloads are evenly distributed.

With a little planning, a basic understanding of group dynamics, and an instinct for which decisions are make or break, and which simply call for a tweak or a fix, your team can make group decisions that are well-informed and carry them out confidently.

Just remember that good decision-making is often the result of a healthy team culture. One where civil debate is encouraged, new ideas are welcomed, and the lines of communication are always open.