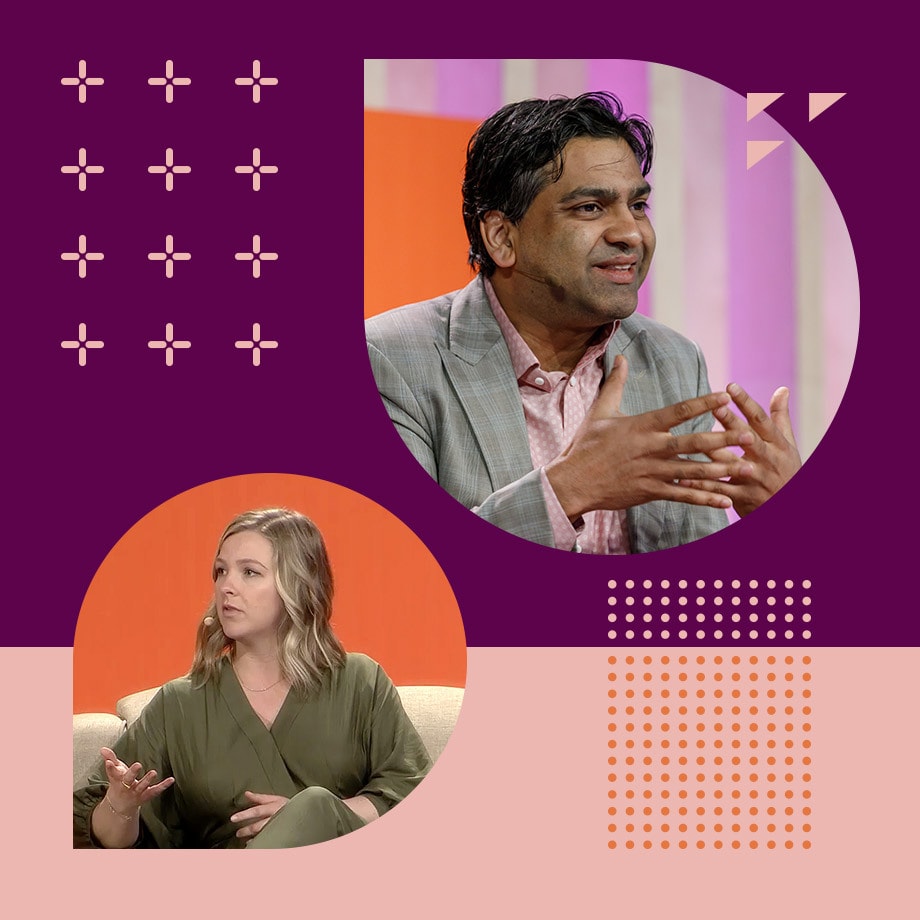 Very few employees have heard “My door is always open” and taken it as a real invitation to communicate with their leaders. Even when the phrase is said sincerely, voicing a candid opinion to a higher-up can be daunting. But feedback is valuable—and if employees aren’t exactly banging down the door to share it, executives have to get creative about engaging with their teams.

At Slack’s 2019 Frontiers conference, Rahul Singh, the executive mobility director at Ford Motor Company, and Kristin Geyer, the manager of internal communications strategy at home-goods retailer Wayfair, discussed their own experiences navigating this divide in the session “Executive View: Transforming Your Business with Transparency and Agility.”

According to Singh, smart executives understand that the person with the answers may not work in (or even near) the C-suite. Those closest to the process or project generally have the information executives need, but they may not be in the biweekly status meetings—or feel comfortable speaking up if they are in the room.

But when executives pose questions to the entire team in Slack, the right person can provide his or her perspective in real time, without inhibitors. “We find that ends up being more empowering to people. It allows us to learn off each other better. Really, who’s got the knowledge?” Singh said. “Let’s break away from that hierarchy that inherently happens within teams.”

Executives simultaneously encourage connection and smart problem-solving when they demonstrate a willingness to break out of their silos. “I’ll have peers of mine say, ‘How did you get that information? We don’t even have that meeting until next week,’ ” Singh said. “I’m like, ‘Well, I’m in the channel. It’s there.’ ”

Create a space for executives to communicate in real time

Executives need to purposefully create opportunities for their employees to communicate with them, which can be a challenge at scaling companies like Wayfair. “We have become the world’s largest online destination for the home with this laser focus on the customer experience,” Geyer said. “We have delivered that through innovation and technology to really optimize that experience.”

The company’s internal systems and communication tools didn’t scale quite as fast as the business, however. “We were used to communicating as a small startup,” Geyer said. Those small-scale methods were no longer effective for a company with 12,000 people.

In early 2018, she kicked off an initiative to improve internal communications, targeting executive engagement. The company launched an executive Ask Me Anything (AMA) channel, where Margaret Lawrence, the vice president of Wayfair Professional, and Steve Oblak, the company’s chief merchandising officer, could answer questions from employees. “It’s an open forum where the host will answer any question that you could think of—across the gamut,” Geyer said.

She was immediately impressed by the employees’ “willingness to just step out from behind that veil of anonymity, go for hard-hitting questions and ask something that they really wanted to know, not something that they thought was politically correct at the moment.”

Set expectations up front for employees and executives

Singh has found that setting expectations is key to effective communication in Slack. He’s told his team, “Look, I’m not going to respond to all the messages, nor do you want me to. But if there is something that you want me to respond to, then tag me [in the channel].” If and when he’s tagged, he’ll jump in to help. That way, he can still review status updates and gain visibility on processes without holding them up.

Geyer recommends that executives set a deadline for responding to employee questions. The Wayfair leaders couldn’t answer questions in real time in the 24-7 AMA channel, but they also didn’t want to disappoint employees expecting a response. “These questions were very well thought-out, so in order to thoroughly and thoughtfully answer the questions, we set up guidelines that [employees] could expect a complete answer in 72 hours, and that pretty much worked out,” she said.

Encourage transparency and trust by participating

Debate and even conflict, handled the right way, are actually a good thing at work. They’re a sign that team members have the confidence to speak up without fear of being penalized. That can be done only when executives prioritize building trust among their employees.

Singh believes that if executives want employees to use Slack to share ideas and concerns, they have to participate themselves. “The way I try to build trust in Slack is not to be, ‘Hey, what’s the status in the Slack channel?’ It’s being an equal participant in it and an observer.” He’ll leave messages of encouragement—“boom” is a signature one—to show that he’s actively engaged with what’s happening in the channel.

When an executive communicates via direct messages or in channels, it legitimizes that form of communication and signals to employees that they don’t need to request a formal meeting to ask questions. The more executives demonstrate that they value transparency and open communication, the greater the trust they will build with employees to share their views and ideas.

Another benefit of building trust is that team members are less hesitant to get input early and often. When Singh joined Ford, he was focused on speeding up new releases for the company’s autonomous vehicles. Lengthy feedback cycles were slowing things down. Now most of those feedback loops are completed in Slack.

He uses the platform to encourage his team members to check in with each other before ideas and projects are letter-perfect, whether it’s a quick code review or looking through mockups. “You could see the results because it’s changing employees’ mindset to ‘I’m going to expose what we’re doing a little bit early, get some feedback, and get it right more quickly,’ ” Singh said.

Use levity to open the door to more serious questions

“Would you rather fight one horse-sized duck or 100 duck-sized horses?” That was the first question dealt to Lawrence during Wayfair’s opening executive AMA. Geyer realized that the absurdity of the question created a lightness that freed employees to ask what was really on their minds, which in turn inspired the founders to answer more candidly.

Similarly, while Oblak tackled hard-hitting questions about the company, one employee asked if he’d be interested in joining their Game of Thrones death bracket—which he did, chatting with the team live every week. “Even though that’s perhaps a little bit weird, it’s exactly the type of connections that we’re looking to make with the AMAs,” Geyer said.

Singh used cupcakes to encourage informal kudos among his team. Early on, he attended occasional launch parties where celebratory cake was served. “I was like, ‘When is the next launch?’ And it would be months away. I was like, ‘How do we break that down into smaller stuff? How do we go from cakes to cupcakes?”

So instead of ordering cakes once a quarter, the team switched to bringing in cupcakes every Thursday to celebrate the small wins. A cupcake channel was begun, and employees started sharing new releases there and recognizing others’ work. “I think it was organic,” Singh said. “When you see that kind of stuff, you get that good feeling that you’re onto something real.”